1857 Depot de Guerre Map of Paris, France and its Monuments 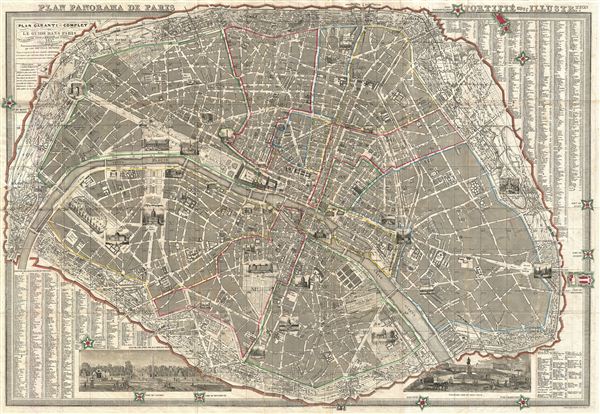 1857 Depot de Guerre Map of Paris, France and its Monuments

A fine tourist 1857 pocket map of Paris drawn by Armand Joseph Lallemand issued by the Depot de Guerre. Centered on the Seine, Lallemand's map covers central Paris as contained by the Thiers Wall. The city is shown at the very beginning of the Haussmann's renovation of the city, so many of Paris' original streets remain intact. Gardens, monuments, and parks are illustrated either in profile or in the form of vignette engravings – making this an ideal companion for the curious tourist. Indexes in the lower left, upper right, and lower right quadrants detail various streets throughout the city, each with a reference attaching it to numbered grid. In the lower right and the lower left quadrants that are two larger vignette views, the first depicting the gate entrance to the Tuileries Garden, and the second depicting the Pont Neuf. Districts, perimeter forts, and the Thiers Wall are highlighted in color. Drawn by Lallemande and issued by the Depot de Guerre, Paris.

Armand Joseph Lallemand (c. 1810 - 1871) was an engraver and map publisher based in Paris during the mid-19th century. Most of Lallemand's work focused on landscapes and building vies, though he did take part in a few cartographic ventures, including the production of an atlas with Alexandre Emile Lapie and several tourist pocket maps of Paris.