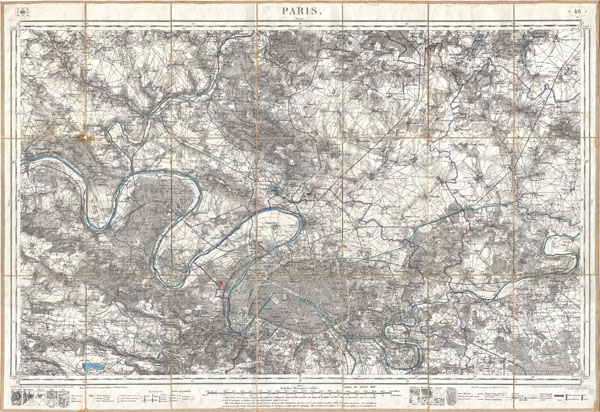 An exceptionally attractive military plan of Paris dating to 1886. Issued by the French mapping bureau, the Depot de la Guerre, this extremely detailed chart covers the vicinity of Paris from the Foret de Carnelle in the north to Versailles in the south and from Meulan in the west to Chessy in the east. Paris proper appears in the at the bottom center. Shows the Enbastillement of Paris in the form of the city walls and the various ring forts. The detail throughout is nothing short of extraordinary with garden paths and individual buildings identified. This map was published in 1886, one year before the Depot de la Guerre was disbanded and is therefore one of the last such maps produced by the Depot.

The Depot de Guerre (1688 - 1887) was a branch of the French military devoted to creating, collecting, and publishing military memoirs, plans, and maps. The Depot was founded in 1688 by Francois Michel le Tellier, the Marquis de Louvois. Louvois held the post of Secretary of State for War under Louis XIV and his best known for composing the first letter regarding the mysterious "Man in the Iron Mask". During the French Revolution and the Napoleonic Wars the Depot de Guerre expanded its operations to include any and all topographical research in France. In 1887 the Depot de Guerre was disbanded and its duties split between the Institut Geographique National (IGN) and the Service Historique de L'Armee (SHA).

Very good. Dissected and mounted on linen in 21 sections. Minor discoloration on original folds - else clean.
Looking for a high-resolution scan of this?