1849 Dyonnet and Leroy City Plan or Map of Paris, France 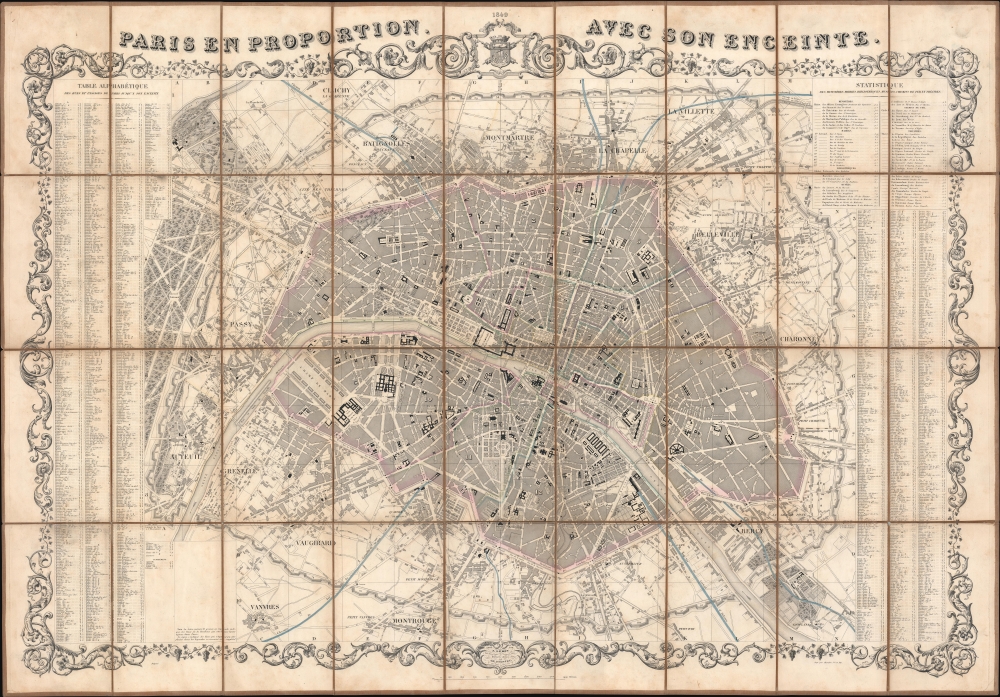 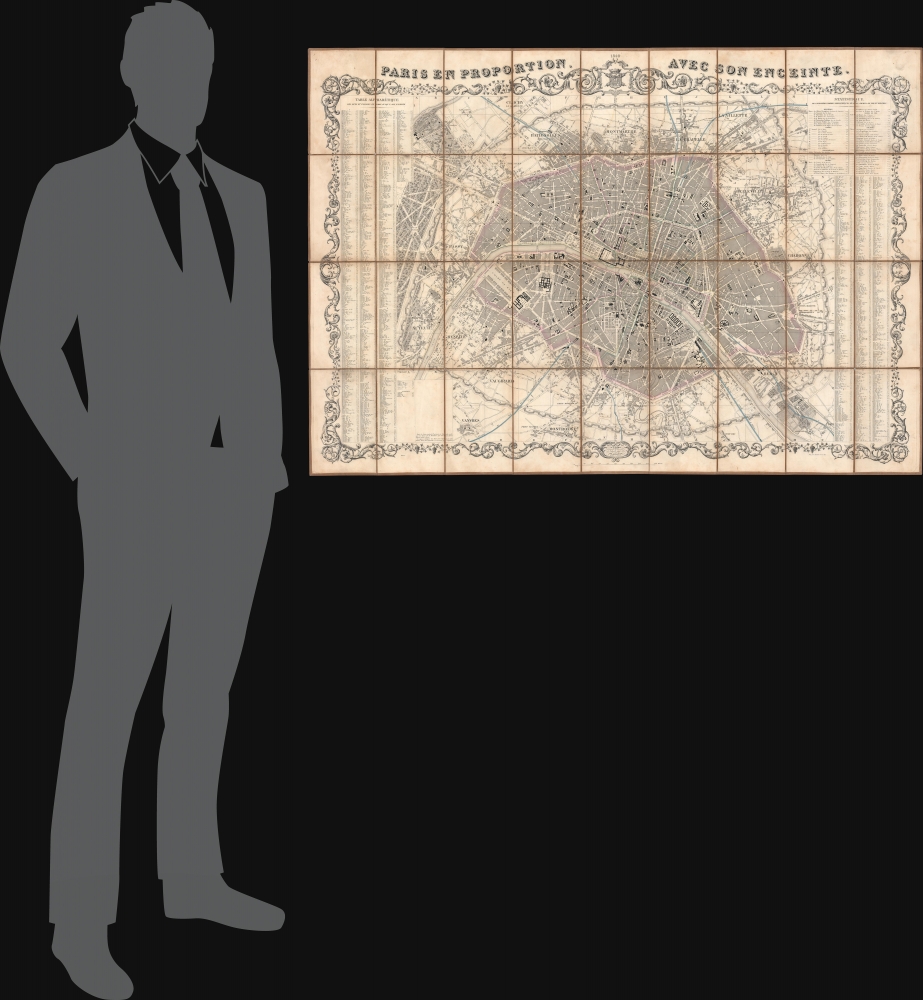 1849 Dyonnet and Leroy City Plan or Map of Paris, France

This is a strikingly decorative 1849 Charles Dyonnet city plan or map of Paris, France. Published during the first year of the French Second Republic (1848 - 1852), the map details Paris, highlighting its buildings, parks, avenues, and other sites. Among these are the Jardin des Tuileries, the Champs- Élysées, the Louvre, the Palais du Luxembourg, the Jardin du Luxembourg, and Père Lachaise Cemetery. Streets and avenues are illustrated and labeled throughout. Train stations are illustrated, and rail lines are highlighted. Paris is surrounded by the recently completed Thiers Wall with its 94 bastions numerically identified. An alphabetic street index appears to the left and right, while an index of theaters, town halls, libraries, and museums occupies the upper right. The whole is surrounded by a arresting acanthus border.

This map illustrates the Theirs Wall five years after it was completed in 1844. Shocked by the seizure of Paris by foreign enemies during the 1814 Battle of Paris, the French King Louis-Philippe (1830 - 1848), conceived of a broad network of walls and forts he believed would make Paris impregnable. The project was met with immediate opposition, some of which claimed that the walls were not defensive but intended to control Parisians in the event of an anti-monarchal rebellion. Nonetheless, under a plan prepared by Marshal General Jean-de-Dieu Soult (1759 - 1861), construction began in 1841. The completed fortifications, named the Thiers Wall after the French Prime Minister at the time, Adolphe Theirs (1797 - 1877), were, at enormous expense, completed in 1844. The walls were 33 kilometers long and consisted of 94 bastions, 17 gates, 23 minor road crossings, and 8 railroad gates. By 1919, advancements in military technology made the walls obsolete, leading to deconstruction by 1929 when they were replaced by the Boulevard Périphérique. .

This map was edited by J. Leroy, drawn and engraved by Charles Dyonnet, and printed by Chardon Jeune et Fils in 1849. It is very scarce. We note four examples in OCLC: Boston Athenaeum, the Institut national d'histoire de l'art, the Bibliothèque nationale de France, and the Universitätsbibliothek Basel. An additional example is part of the collection at the Bibliothèque historique de la Ville de Paris.

Charles Dyonnet (fl. c. 1822 - c. 1880) was an extremely active Paris based engraver working in the mid to late 19th century. From his offices at 220 Rue St. Jacques, Paris, Dyonnet engraved numerous maps for many of the most prominent 19th French cartographic publishers including Vuillemin, Dufour, Fremin and Duvotenay. From 1850-1861, he held the coveted position of "Graveur du Dépot de la Marine," and in this position engraved numerous French naval and military maps. Dyonnet had a detail oriented and aesthetically minded hand and is responsible from some of the most beautiful French maps to emerge during the 19th century. Learn More...


Charles Chardon (1832 - May 24, 1896) was a Paris, France, based printer and publisher active in the late 19th century. The firm was originally founded in 1818 by Chardon the elder on Rue Pierre-Sarrazin. Around 1835 he relocated to Rue Hautefeuille. In 1850 the firm was passed to Francois Chardon, his eldest son, and then in 1862 to Charles Chardon, his younger son. Charles relocated the firm to larger offices at 10, Rue de l'Abbaye. By 1880 Charles Chardon, from his office at 10 Rue de l'Abbaye, was promoting himself as a heliographic engraver - an early photoengraving technique of which he was an early adopter. Possibly because of his heliographic press, Chardon was contracted to produce numerous prints from drawings stored at the Chalcographie of the Louvre. Francois Chardon passed the firm to Charles Wittmann in 1890. Continuing in Chardon's tradition, in 1896 Wittmann become the director of the Louvre's Chalcographie. Learn More...