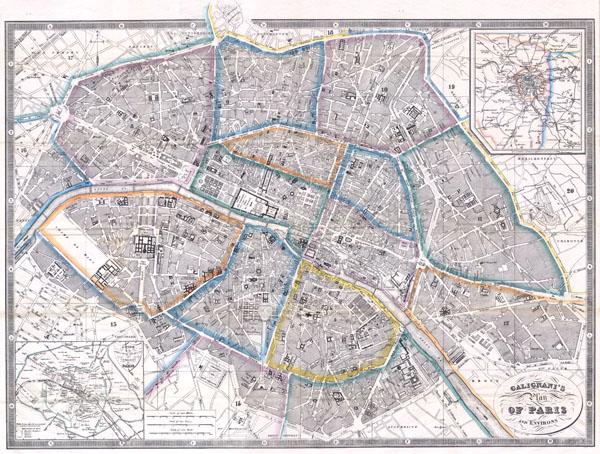 A large and attractive map of Paris dating to the 1860s. This fine map of central Paris was the only cartographic endeavor of the Paris-dwelling Italian Anglophile, Antonio Galignani. Galignani would have prepared this map for sale to English tourist through his English language bookshop on Rue de Rivoli, in downtown Paris. As such, this is a rather unusual document, a map made in the French style but with text in the English language. Labels streets, buildings, and arrondissements in superb detail. Inset map of the Paris vicinity in the upper right. Lower left quadrant features a 'Guide to the Principal Objects of Curiosity in Paris.'

Giovanni Antonio Galignani (1757 - 1821) was an publisher and newspaperman born Brescia, Italy. Galignani lived in London for some time before moving to Paris in 1800. Around this time he began publishing a daily English language Newspaper in Paris known as "Galignani's Messenger". In 1810, Galignani also opened an English language bookstore at 224 Rue de Rivoli, Paris, where he sold many of his publications, including, most likely, this map, his only known cartographic endeavor. Following Antonio's death in 1821 both the bookstore and publishing firm were taken over by his sons, John Anthony and William Galignani. In 1884 the daily newspaper was sold and renamed the "Daily Messenger". The Bookstore, Galignani's, remains to this day one of Paris' finest English Language bookshops. Learn More...

Very good condition. Minor discoloration along original folds – see photo. Else clean and beautiful. Wide margins all around.
Looking for a high-resolution scan of this?