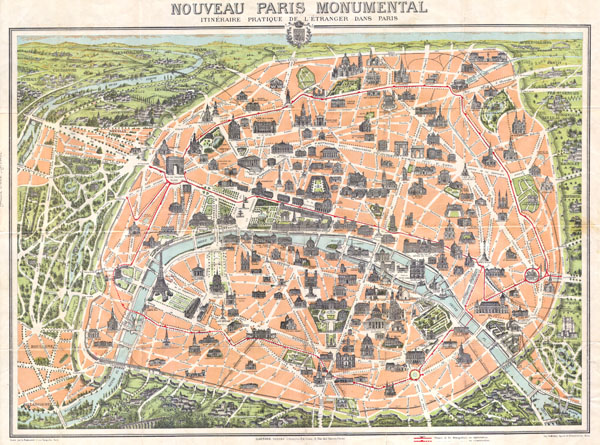 This rare c. 1900 pocket map of Paris, France, combines the virtues of a map and a view. Covers the old walled city of Paris and surrounding areas. Paris proper is colored in appealing pastels and exhibits more 'map-like' qualities in the layout of the streets, trains, and bridges. Important buildings and monuments are shown in profile. These include the Eiffel Tower, The Arc de Triomphe and the Opera, among hundreds of others. The regions outside the walled city are mostly in view format, with a horizon in at top and trees, buildings, and bridges shown in profile. An altogether marvelous decorative map and one of the first tourist maps to show the Eiffel Tower. Issued with its accompanying guide, bound in red linen. Features 13 pages of text with guides to museums, hotels, shops, and other advertisements. Engraved by L. Poulmaire, printed by Dufrenoy, and published in Paris by Librairie Garnier Frères.