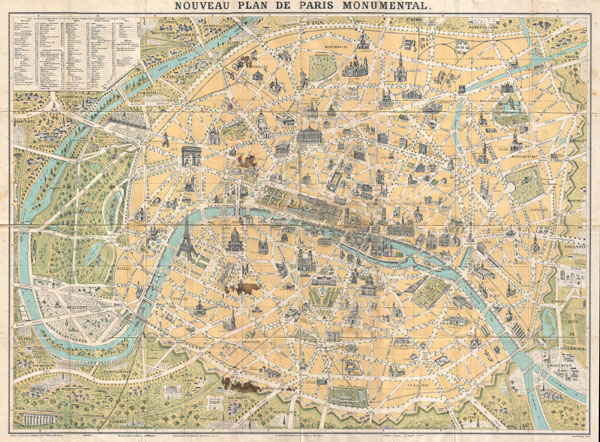 An attractive map of Paris, France issued in c. 1890 by L. Guilmin. Covers the old walled city of Paris and the immediate vicinity, especially to the west. Important buildings are shown in profile. All major streets are identified. Identifies numerous buildings and a number of surrounding communities and gardens, including the Bois de Boulogne.

L. Guilmin (fl. c. 1890 - c. 1933) was a French map and book publisher active in the late 18th and early 19th century. Guilmin has a large corpus of work, but remains personally obscure. His maps begin appearing in the 1890s and continue to appear until the 1930s. He is sometimes associated with A. Leconte and L. Joly, two other prominent Parisian publishers of the period. At various time he had offices at 90 Boulevard Voltaire, 63 Boulevard Voltaire, and 38 Rue Sainte-Croix-de-la-Bretonnerie.


Eugène Dufrenoy (January 21, 1834 - 189?), aka Dufrenois, was a French printer, lithographer, and engraver active in Paris during the second half of the 19th and the early 20th centuries. Dufrénoy born in Bourg-la-Reine, in what is today the southern suburbs of Paris. He was based, for at least part of his career, at 34 Rue du Four, Paris. In 1881 Dufrénoy acquired a large space at 49 Rue du Montparnasse. This space still operates as a printshop with Dufrénoy's old presses as IDEM Paris. ˜

Very good. Original fold lines exhibit some wear - especially at fold intersections. Minor staining near Avenue de Saxe, near Pte. de Vanves, and near the Theatre Marigny.
Looking for a high-resolution scan of this?