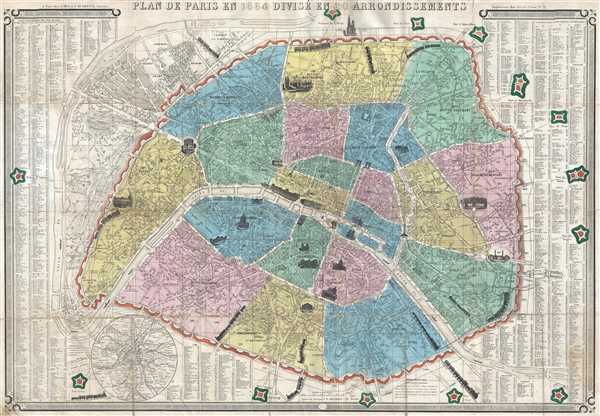 Includes charming vignettes of trains entering and leaving the city.
$600.00

This is an 1864 J. N. Henriot city map or plan of Paris France. The map depicts the city from the Basilica of St. Denis (Abbaye de St. Denis) to the Fort de Bicêtre and from the Bois de Boulogne to the Fort de Nogent and the Fot de Rosny. Paris is divided into twenty arrondissements, just as it is today. Each arrondissement is shaded a different color and labeled, for easy identification. Several famous Parisian landmarks are beautifully illustrated in profile, such as the Arc de Triomphe, the Louvre, Notre Dame, the Panthéon, and Les Invalides. Charming vignettes of trains are located around the outskirts of the city, indicating where the rail lines are and their destinations. Framed by an index, over 240 locations are numerically identified throughout the map and are organized alphabetically and by neighborhood outside of the twenty arrondissements. Indexes for bridges, quays, and the doors into the city are separate. A circular inset map along the bottom border depicts the environs around Paris, illustrating both roadways and rail lines. A keyboard border surrounds the map, with decorative flourishes at the corners.

This map was engraved by J.N. Henriot and published by A. Bès and F. Dubreuil in 1864.