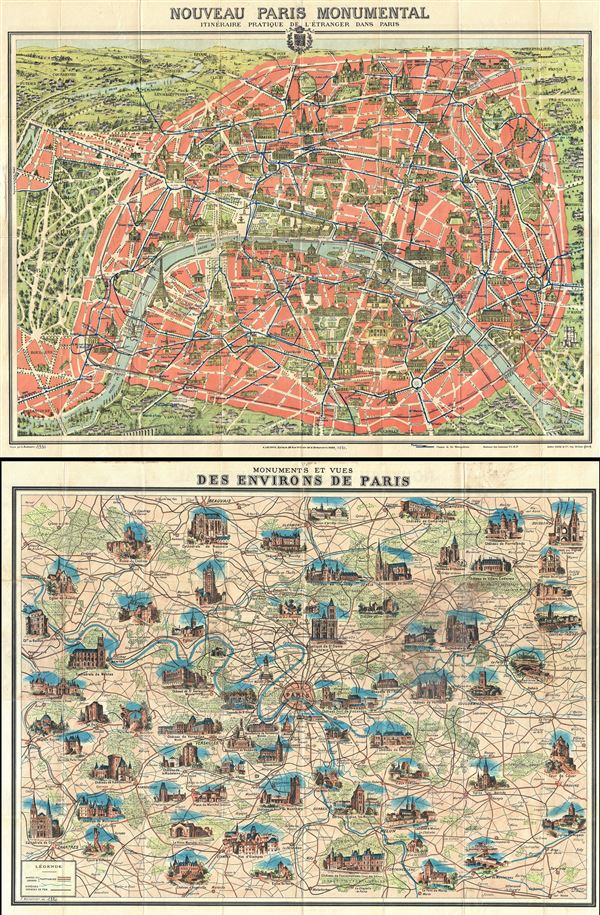 This is an iconic 1934 tourist pocket map of Paris, France. Presented as a same field birds-eye view, this map centers on the Seine River, and covers the embastilled heart of Paris. Although ostensibly designed as a subway map, this map offers much more, with important buildings and monuments shown in profile, including the Eiffel Tower, the Arc de Triomphe, Sacre-Coeur, the Pantheon, etc. Paris itself is set as if in a verdant garden surrounded by the Bois de Boulogne and various suburban villages. In the north, under a blue sky rolling hills stretch indefinitely into Normandy and possibly the English Channel. Tom Conley, referencing the map in his brilliant discussion on cartographic influences in cinema describes it beautifully,

…the north, at the top, is capped by the Sacre-Coeur; the station at the Port d'Orleans marks a southern limit; to the west the maze of alleys in the Bois de Boulogne offers a fantasy of infinite promenades under leafy trees; to the east, at the Place de la Triomphe de la Republique, is found a sculpture celebrating secular France, that is protected by the moat-like circle of a subway line. A railway inside of a circular, crenelated wall of mediaeval aspect surrounds much of the city. Blocks of pink, denoting the inner space of the city, are cut by a broad swath of white lines indicating the width and length of Baron Haussmann's creation of boulevards. The Seine, colored in blue, bends its way through Paris, dividing the Right Bank (above) from a lesser mass of the Left Bank (below). The major monuments of the city are finely drawn and situated at their proper places. Yet their scale, of far greater proportion than that of the map itself, makes clear that he city is an assemblage of enduring monuments…

This map shows both the train and Metro lines throughout the city. It was issued in various editions from, roughly 1900 to 1937. Though most examples are undated, the state of development of the Paris Metro, particularly the extension of line 12 from Porte de Versailles to Mairie d'Issy, suggests that this map was printed in 1934.

The map is attached to original red paper booklet. A similar map of the greater Paris environs appears on the verso. Engraved by L. Poulmarie and printed by Gaston Maillet. Published by A. Leconte, of 38 Rue St. Croix de la Bretonnerie, Paris.

Very good. Minor wear along original fold lines. Map of Greater Paris Vicinity on verso. Accompanied by 12 page booklet. Dated added in manuscript on booklet and map is incorrect. Printed maps on both recto and verso.
Looking for a high-resolution scan of this?