1853 Meyer Map or Plan of Paris and its Environs 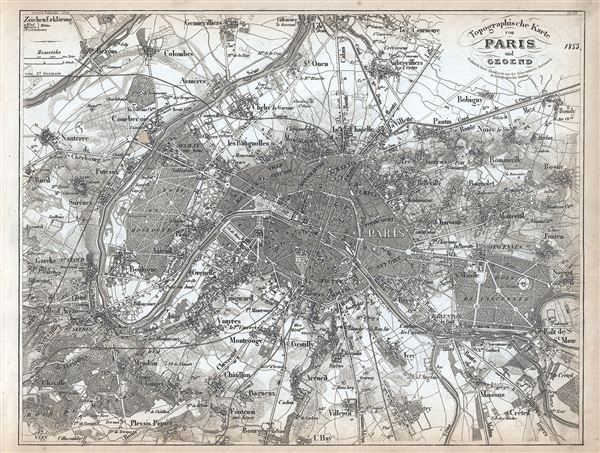 1853 Meyer Map or Plan of Paris and its Environs

This is a beautiful 1852 map or plan of Paris and its immediate vicinity by Joseph Meyer. It covers the embastilled center of Paris as well as the Seine Valley from Bezons and Nanterre in the northwest to Creteil in the southeast. Mostly likely derived from French military maps issued by the Depot de Guerre, this map reflects the transformation and modernization of Paris under Napoleon III and Georges-Eugene Haussmann. It offers extraordinary detail throughout showing forests, fields, individual buildings, gardens, estates, temples, farms, rivers, roadways, trains, and topographical features.

This map was issued as plate no. 108 in Meyer's Zeitung Atlas. Although all the maps in this atlas are not individually dated, the title page and maps were often updated while the imprint with the date was not, causing confusion to the exact date for some of the maps. Moreover some maps in the atlas were taped in at a later date as an update to the atlas. We have dated the maps in this collection to the best of our ability.