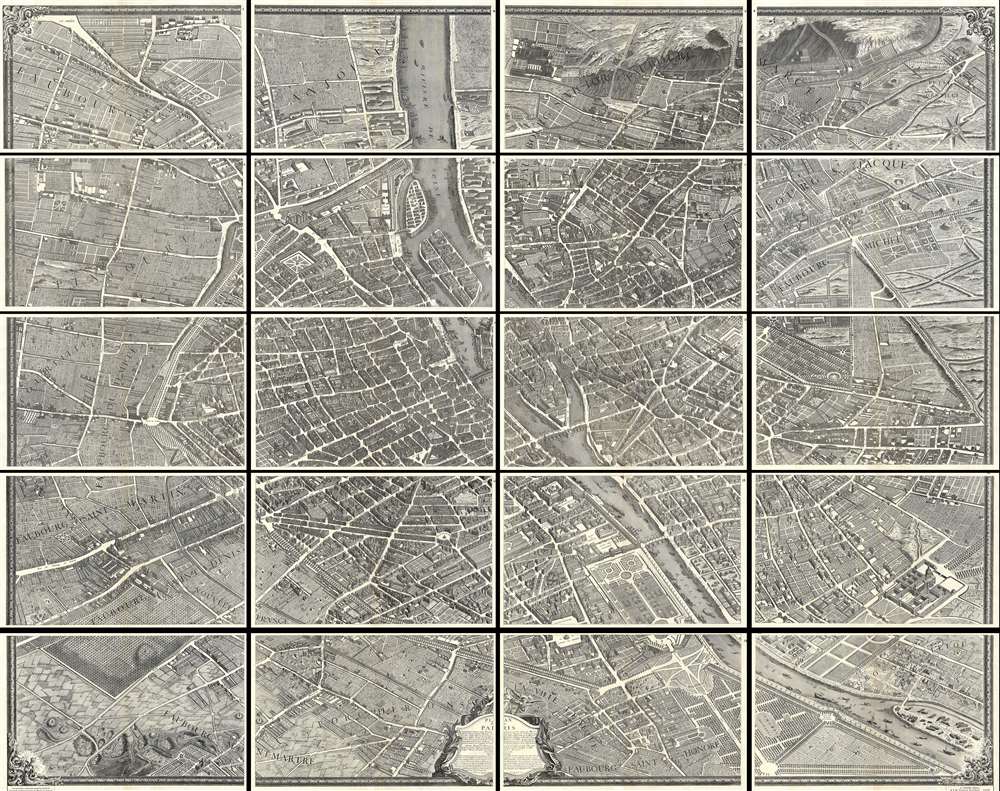 This is the c. 1900 Taride edition of Louis Bretez and Michel-Etienne Turgot's monumental 1739 map of Paris. Turgot's map of Paris is possibly the most ambitious urban mapping ever undertaken. This map shows the whole of 18th century Paris and offers an expansive perspective on the city before Baron Georges Eugène Haussmann's 19th-century redesign. Turgot, who held the mayor-like office of Prevôt des Marchands de Paris , commissioned Louis Bretez and Claude Lucas to produce this map. Oriented to the east on an axonometric projection, this map is best understood as an aerial view where in every building, window, tree, shadow, and park are shown from an equidistant aerial perspective. In order to produce the thousands of sketches and surveys required to complete this map, Bretez was issued a permit to enter every building in Paris. It took the team nearly five years of exhaustive sketching and surveying to assemble this masterpiece.

The Turgot map, as it is commonly known, was first issued in 1734. It consisted of twenty individual sheets that can be assembled into a massive and striking display roughly 8 feet high by 10 feet wide. The present example is a lithographic reissue published by Alphonse Taride c. 1900. Like the 1734 copper plate engraving, Taride's reissue is presented as a loose-leave folio, wherein the individual sheets can be removed and assembled, or enjoyed as a volume. This is the finest example, of the Taride edition of the Turgot Plan we have ever seen.

Very good. The finest example by far of this edition of the Turgot Plan that we have ever seen. All sheets have ample margins which can be trimmed for tight framing.