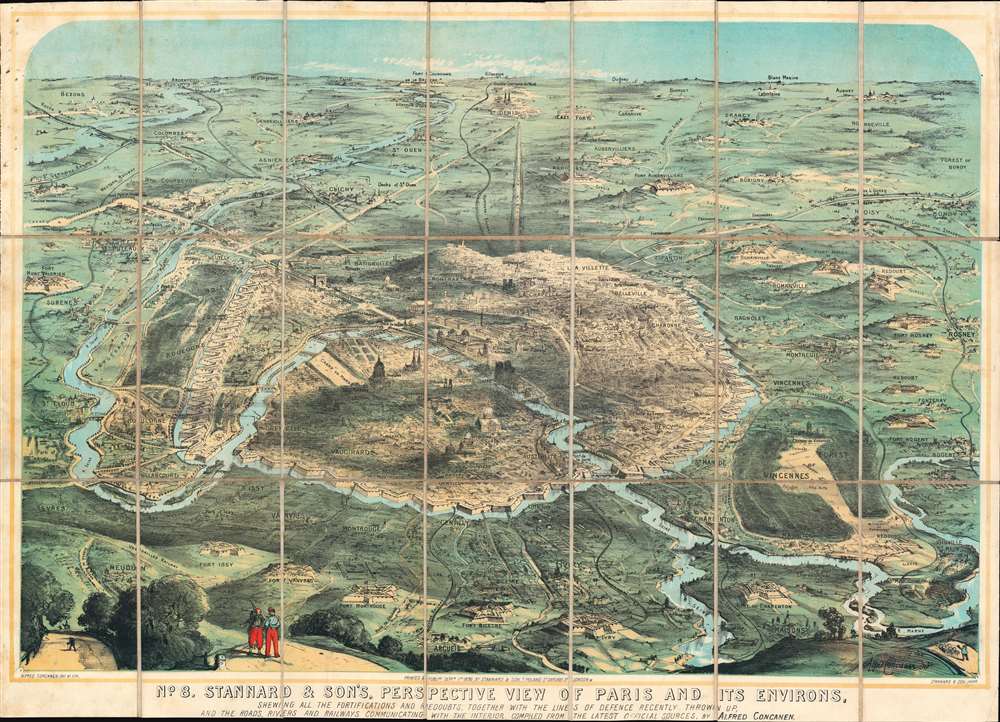 No. 8. Stannard and Son's, Perspective View of Paris and its Environs, Shewing All the Fortifications and Redoubts, Together with the Lines of Defense Recently Thrown Up, and the Roads, Rivers, and Railways Communication with the Interior.
1870 (dated)     20 x 29.5 in (50.8 x 74.93 cm)

Published eighteen days before the beginning of the Siege of Paris on September 17, 1870, this 1870 Alfred Concanen view of Paris and its environs details the newly constructed defensive works around the French capital. Paris itself occupies the center of the view, and the Louvre and Notre Dame are easily identifiable, along with the Arc de Triomphe, the Panthéon, and the Invalides. The city's walls encircle the entire city, spanning 20.5 miles. A series of sixteen disconnected forts, constructed to protect the city gates, surround the city. Redoubts and other fortifications were built as well to supplement the forts.

Paris's Fortifications and the Franco-Prussian War

Paris's fortifications began with its walls, built between 1841 and 1844, in an effort by the July Monarchy to avoid the same defeat that France suffered in 1815. The July Monarchy and its government ministers believed that a series of forts and city walls would prevent Paris from ever falling to a siege. The walls included over ninety bastions, seventeen gates, and eight passageways for trains. Successive French governments believed these fortifications to be impregnable. Nonetheless, during the Franco-Prussian War of 1870, the French suffered a series of defeats that eventually led to a siege of Paris, which lasted from September 17, 1870 until January 28, 1871. Over 180,000 Prussian and German soldiers laid siege to the city, and even though a reported 500,000 French soldiers occupied Paris, the Prussian army outclassed the French soldiers to such a degree that the French army could not break the siege. The Prussian commanders had no intention of attacking the city. However, as the siege wore on, it became obvious that such measures would be necessary. In the end, over 12,000 shells were fired on Paris in an effort to break Parisian morale. Paris also suffered horrible outbreaks of tuberculosis and other diseases. The Armistice was finally signed on January 27th, and the siege lifted. The Germans held a victory parade in Paris on March 1, 1871.

This view was drawn by Alfred Concanen and published by Stannard and Son on September 1, 1870, just over two weeks before the Siege of Paris began. Three examples are cataloged in OCLC and are part of the institutional collections at the Library of Congress, the University of Basel Library, and The British Library. We are also aware of one example in private hands.

Alfred Concanen (May, 1835 - December 10, 1886) was a British publisher and lithographer active in London, England, in the second half of the 19th century. Concanen was of Northern Irish stock from the Galway region, but was born in Nottingham, England. His father Edward John Concanen (1804 - 1868) was a noted 'engineering artist' and portraitist. It is unclear where Concanen learnt lithography, but it is likely that he was trained by his father. As early as 16, Concanen is recorded as working as an attorney's clerk. Concanen worked for several years with the Illustrated Sporting and Dramatic News. In the 1850s he partnered with Thomas Wales Lee (1833 - 1910) and Henry Herepath Siebe (1832 - 1887) publishing under the imprints of 'Concanen, Lee and Siebe' and 'Concanen, Siebe and Co.' Lee left the firm in February of 1865 and Concanen himself in December of 1866. He also began publishing on his own, issuing sheet music covers, in 1860. While Concanen is most famous for his sheet music and theater broadsides, he did dabble in chromolithograph 'seat of war' views in partnership with Stannard and Son from about 1870. Described as 'slight of build with a fair full moustache, something of a dandy, good natured, generous, a play copy of the lions comiques whom he immortalized in his lithographs.' He studio was located at 12, Frith Street, Soho, London. Concanen died suddenly in 1886 after a post-theater visit to a pub on the strand. Learn More...


William Thomas Stannard (December 15, 1815 - November 23, 1895) was a lithographic printer active in London during the second half of the 19th century. Stannard was born in London, the son of a postal worker. Stannard published initially in partnership with 'Rae' as 'Stannard and Rae' and alone as 'Stannard and Co.' In 1847, he entered into partnership with Francis Dixon as 'Stannard and Dixon', an imprint that remained active until June of 1868, when the partnership dissolved. At this time, Stannard's son, William Stannard (1848 - 1895), joined the firm, which was reestablished as 'Stannard and Son.' This father-son partnership remained active until November of 1891. From 1870, he employed the artist and lithographer Alfred Cancanen to issue numerous striking panoramic 'seat of war' views. In his personal life Stannard was a known philanderer who kept two households, one with his wife Catherine Jane Bowskill (1821 - 1887) and another with his mistress Selah Sands (1831 - 1905). Shortly after Stannard's death, the firm was liquidated at auction. Learn More...