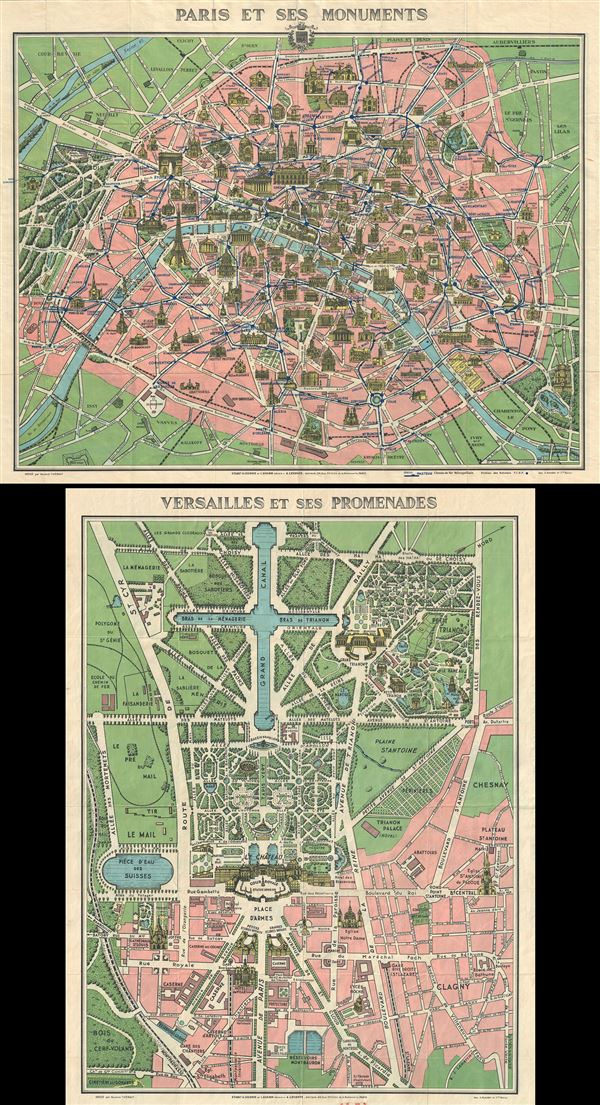 This is an extremely attractive c.1925 tourist pocket map of Paris, France. It covers the old walled city of Paris and the immediate vicinity. Drawn in a lavish art deco style with important buildings shown in profile, including the Eiffel Tower, the Arc de Triomphe, Sacre-Coeur, the Pantheon, and others. Shows both the train and Metro lines throughout the city. This map was issued in various editions from, roughly 1900 to 1937. Most examples, like this one, are undated but we can estimate an approximate date based upon the development of the Metro. This example is also exceptional in that it features a pan of Versailles on the verso. Engraved by Maurice Thiebaut and printed by A. Humblot. Published by A. Leconte and L. Guilmin, of 38 Rue St. Croix de la Bretonnerie, Paris. The image above shows both the front and back of a single sheet.


L. Guilmin (fl. c. 1890 - c. 1933) was a French map and book publisher active in the late 18th and early 19th century. Guilmin has a large corpus of work, but remains personally obscure. His maps begin appearing in the 1890s and continue to appear until the 1930s. He is sometimes associated with A. Leconte and L. Joly, two other prominent Parisian publishers of the period. At various time he had offices at 90 Boulevard Voltaire, 63 Boulevard Voltaire, and 38 Rue Sainte-Croix-de-la-Bretonnerie.

Very good. Minor wear along original fold lines. Map of Versailles on verso.
Looking for a high-resolution scan of this?