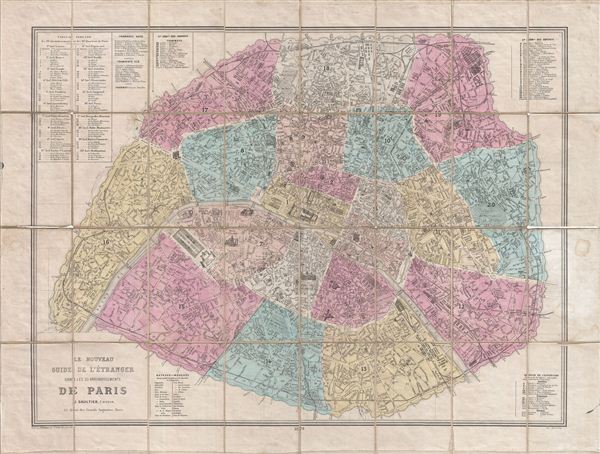 This is an extremely attractive 1878 tourist pocket map of Paris, France by A. Logerot. Centered on the Seine, this map covers central Paris as contained by the Thiers Wall. Reflects the transformation and modernization of Paris under Napoleon III and Georges-eugène Haussmann. The map is divided up into 20 arrondissments (20 administrative districts), detailing individual buildings, streets, monuments, gardens and palaces. Shows exceptionally remarkable attention to detail in the public gardens where subtle expressions of landscape design are apparent. Throughout important buildings are drawn in profile. Indexes are present in all four corners. The upper left corner index details an indicative table of 20 districts and 80 districts of Paris. The upper right, lower right and lower left corner indexes detail the Omnibus, Tramways and Boat services. This map predates the eiffel tower and is color codes by arrondissement. This map was prepared by A. Logerot in 1878.

Good condition. Some wear on fold lines and to original linen backing. Linen split at places.
Looking for a high-resolution scan of this?