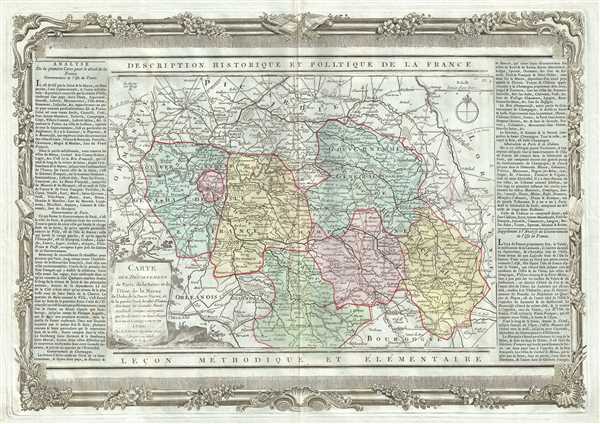 Home of the Champagne wines.

This is a beautiful 1790 map featuring parts of the Ile-de-France, Champagne-Ardenne and Bourgogne regions of France, including Paris, by the French cartographer Louis Brion de la Tour. The map covers the departments of Yonne, Aube, Haute-Marne, Seine-et-Marne, and Seine-et-Oise surrounding Paris. Color coding divides the map according to region and notes numerous towns, cities, rivers, forests, mountains and other topographical features.

Yonne is of France's premier Burgundy wine region and produces some of the worlds finest reds. Yonne is also one of only two departments that produce Chaource cheese. Chaource is a cow's milk cheese, cylindrical in shape. The central pate is soft, creamy in color, and slightly crumbly, and is surrounded by a white penicillium candidum rind. The Seine-et-Marne region produces a wide variety of wines and hosts an annual wine and cheese fair. This area is known for its production of a brie-style cheese called 'Fromage de Meaux.' Over 25 liters of milk are used produce just one wheel of this raw-milk cheese. When ripe, its rind breaks at the slightest touch, allowing the beautiful, hay-colored, almost liquid paste to ooze out.

Aube and Haute-Marne are part of France's Champagne region, where the world-famous sparkling wine of the same name is produced. This area is known for a variety of wines from the Coiffy-le-Haut vineyard, champagne from Rizaucourt-Argentolles, and the local favorite, 'Choue' beer. It is also famous for its production of Langres, a salty cheese with a pronounced odor.