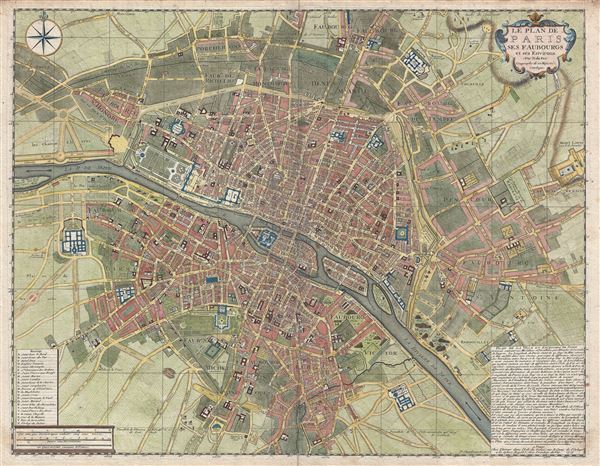 A sarce and beautiful map of Paris, France.

A fine example of De Fer's scarce and beautiful 1717 map of Paris, France. Centered on the Seine River, the map covers from Ile aux Cygnes to Mont Louis, and from Les Porcherons to Le Gaubourg Saint-Marceau. All streets, gardens, important buildings, palaces, some topography, and estates are noted. De Fer first issued this map in 1707, and by 1720, it had been adapted by Delisle, who retitled and updated it substituting in the process his own imprint. The present example, issued in 1717, is one of the last De Fer issues of this stunning map. The map was engraved by P. Starckman for De Fer in 1717.


Pieter Starckman (fl. c. 1680 - 1730), a.k.a Peter or Petrus, was a Dutch engraver active in the late 17th and early 18th centuries. Starckman was likely born in Amsterdam in March of 1655, the son of Steven Starckman and Atalijntge van Oostijnen. During much of his career he was active in the Hague, but some records suggested that in the early 18th century he held a royal appoint in France as Graveur du Roy en Geograpie, Fortifications et Marines. Starckman engraved for numerous cartographers as well as on his own account, usually signing his work as 'P. Starckman'. He collaborated with the finest mapmakers of his day, including De Fer and De L'Isle.