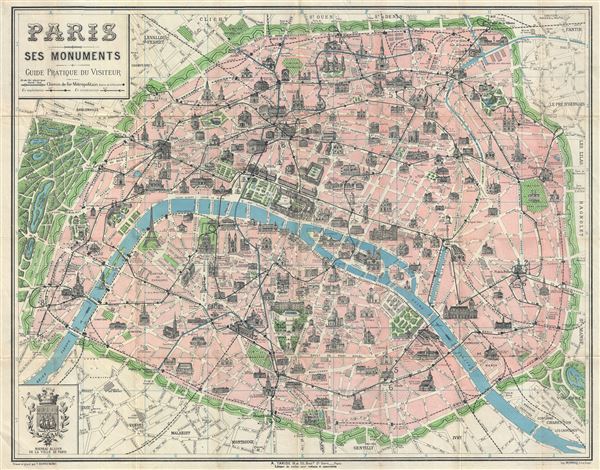 This is an attractive c. 1925 pictorial tourist pocket map of Paris, France by F. Borremans. The map depicts the city of Paris from Bois de Boulogne to Bagnolet and the Bois de Vincennes and from Porte de la Villette to the Park Montsouris. Parisian landmarks, including the Louvre Notre-Dame, the Arce de Triomphe, the Eiffel Tower, and the Opéra, are all illustrated in profile, as are numerous others. Parks, are colored green, allowing them to stand out as the oases of urban life that they are. Myriad roads are also labeled, and the city's Metro lines crisscross their way throughout the city, allowing Parisians easy access from one side of the City of Light to the other.

Though undated, a date can be approximated based one the development of the Metro system (specifically Metro line 9 and Metro line 7) and the map's overall style and construction. This map was drawn and engraved by F. Borremans, printed by Monrocq, and published by Alphonse Taride of 18-20, Boulevard St. Denis, Paris.