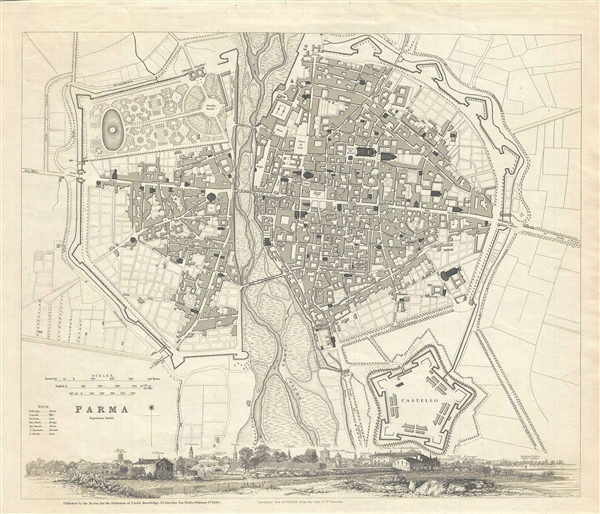 This is a scarce 1840 first edition map or city plan of Parma, Italy, published by the Society for the Diffusion of Useful Knowledge. The map covers the Italian city of Parma divided into two parts by the Parma River. It depicts the fortified city in detail, noting individual streets, important buildings, monuments, gates, bridges and parks. The Castello or Citadel of Parma and the Palazzo Giardino are also identified.

Parma, in the Emilia-Romagna region of Italy, is famous for its prosciutto (ham), cheese and magnificent countryside. A beautiful panoramic view along the bottom of the map features Parma as seen from the Gate of Santa Barnaba.

This map was part of A Series of Maps, Modern and Ancient, issued by subscription by the SDUK. Each folder in the series would contain a set of two maps bound together. The map accompanying this folder, not included here, was of New York City. Original folder included the names of committee members of the ‘Society’, a list of maps already published, the folder number, which is this case was LXXXII, the contents and the printer and publication details. This map was engraved and printed by J. Henshall and William Clowes and Sons and issued by the Society for the Diffusion of Useful Knowledge on Feb 1, 1840 for publication in their Feb 17, 1840 subscriber’s edition folder. The folder at the time was priced at 1 shilling plain or 1 shilling 6 pence colored. This map was later issued in the S.D.U.K. Atlas which was appeared in several editions from about 1844 well into to the 1850s.