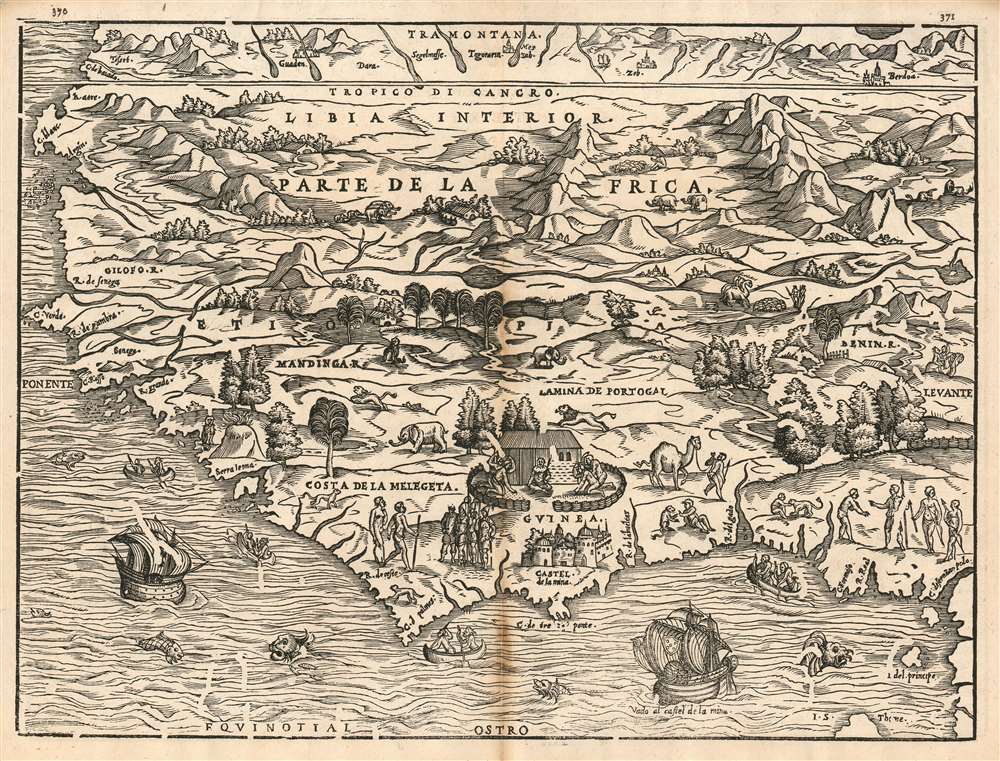 This is G. B. Ramusio's 1556 map of Western Africa, one of the earliest maps of Africa to be based substantially on contemporaneous information. The map covers western Africa and the Guinea Coast, stretching from modern day Mauritania to Cameroon. It appeared in Ramusio's Delle Navigationi et Viaggi, the first collection of first-hand travelers' reports. With respect to Africa, Ramusio relied both on information of Portuguese travelers and the reports of Leo Africanus, the author of the Descrittione dell’Africa which appeared in the third volume of Ramusio's Viaggi. The coastline shows remarkable detail for the period: in addition to the prominently-featured Castel de la Mina, Portugal’s infamous slave fortresses in Africa in present-day Ghana, the map also names Cape Verde, the Gambia River, Senegal, Sierra Leone, and the Mandinga River - all along the western coastline which would prove to be France's primary colonial foothold in the 17th century and later during the scramble for Africa. Although France would not establish a strong colonial presence here until well into the 17th century, as early as 1556 we see the notion of a French colony in western Africa promoted. Ramusio's map features a ship bearing the Portuguese arms sailing to La Mina, but another ship – this one with the French fleur de lis – is shown sailing to Sierra Leone and the Costa de la Melegeta.

Perhaps unsurprisingly, the map is less revelatory with respect to the interior of Africa, which would be opaque to European explorers until the end of the 19th century. Some place names do appear to have some basis in actual report. The Empire of Benin is named: the Portuguese had contacted this kingdom, bringing back tales of a noble city with a powerful king, and trading metal and guns for ivory, gold, and slaves. The English, too, had contacted Benin by 1553. In the northern extremes of the map, above the Tropic of Cancer, several cities appear - notably Segelmesse, and the oasis of Berdoa, all reported by Africanus.

Where the map is terse with its data, it is lucid in its visual description of Africa to a European audience. A barren, desert 'Libya Interior' in the north gives way to mountains and jungle below. Not only exotic animals like elephants and monkeys appear, but also herds of camel appear, and a shepherd with a flock. Africans are shown with houses and stockades. A king is shown with courtiers at Guinea; and while many Africans here are portrayed in primitive light, the soldiers in the vicinity of Guinea are shown well-armed and in order - reflecting the European strategy of allying with strong local kingdoms in order to facilitate the exploitation of the broader region. And while there are plentiful sea-monsters visible amongst the European ships and native canoes, the land is devoid of such beasts as the cyclops which dominates Munster's 1540 map of the continent. The Africa depicted here is an Africa that can be reached, and controlled, by men.

Ramusio's Delle nauigationi et viaggi was first published in Venice in 1556. A warehouse fire subsequently destroyed the original woodblocks, necessitating their complete re-cutting for the second, 1565 edition of the work; the geographical content of the maps is identical, though the decorative engraving contains subtle but distinctive changes. Between 1565 and the third edition of the Viaggi, insects were permitted to attack the woodblocks, resulting in the tracks visible in all 1606 examples of Ramusio's maps. There are examples of the separate map in its 1606 state in four institutional collections; the three-volume Viaggi is well represented in institutional collections.