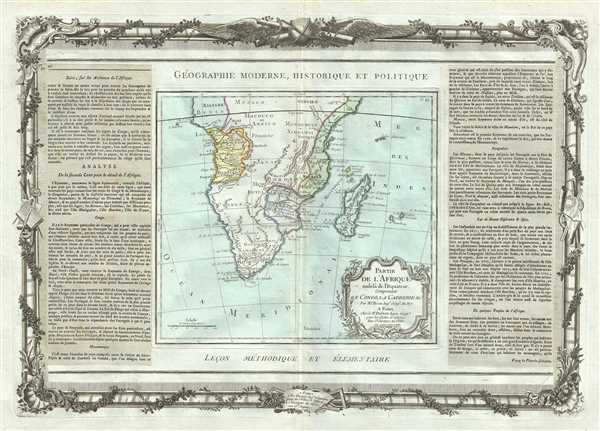 Uncommon early mapping of the southern parts of the African continent.
$300.00

This is a lovely example of the 1786 map of the Southern Africa by French cartographer Louis Brion de la Tour. The map covers the entire southern portions of the continent and extends from Good Hope north as far as Brava. Includes Madagascar. Fort Hollandois is identified near the Cape. The western kingdoms of Benguela, Angola, Congo and Benin and the eastern kingdoms of Monomotapa and Zanguebar are noted.

This region of Monomotapa, today part of Mozambique and Zimbabwe, was once rich in gold and was often associated with the Biblical kingdom of Ophir, which is mentioned in the legend of King Solomon's Mines. This was one of the first parts of eastern Africa to be explored and colonized by Portuguese traders looking for a source of gold to rival that of the Spaniards in Mexico and Peru. Unfortunately for everyone involved the Mines of Solomon had been all but exhausted shortly before the Europeans arrived. Just north of Monomotapa a very embryonic mapping of Lake Malawi appears with no defined northern terminus.

A beautifully engraved title cartouche adorns the bottom right quadrant of the map. To the left and right of the map are paste downs of French text with remarks and description of the map. Surrounding the whole is an elaborate decorative border featuring floral arrangements, surveying tools, elaborate baroque scalloping, and a winged globe. This map was issued as plate no. 47 in the most deluxe edition of Desnos’ 1786 Atlas General Methodique et Elementaire, Pour l’Etude de la Geographie et de l’Histoire Moderne.