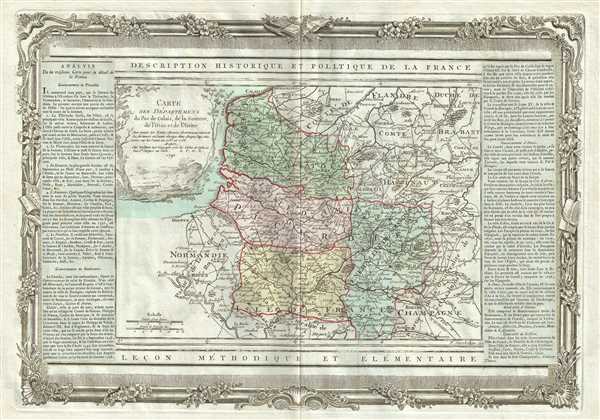 Decorative map of the Picardy region of northern France.
$200.00

This is an attractive 1790 map of the Picardy region in northern France by the French cartographer Louis Brion de la Tour. Covers the French departments of Aisne, Oise, Somme and Pas-de-Calais. Color coding divides the map according to region and notes numerous towns, cities, rivers, forests, mountains and other topographical features.

The region of Picardy is famous for the production of Maroilles family of cheeses. These include the Gris de Lille (Pas-de-Calais), Guerbigny (Picardy), and Rollot (Somme). The cathedral of Cambrai (the city of Cambrai is identified in this map), in the department of Nord is famous for the composers it employed in the 15th and 16th centuries. Among them were Philippe de Monte, Johannes Lupi, Ockeghem and others.

A beautifully engraved title cartouche adorns the top left quadrant of the map. To the left and right of the map are paste downs of French text with remarks and description of the map. Surrounding the whole is an elaborate decorative border featuring floral arrangements. This map was issued as plate no. 6 in Desnos’ Atlas National de France, bound with the most deluxe edition of his 1786 Atlas General Methodique et Elementaire, Pour l’Etude de la Geographie et de l’Histoire Moderne.