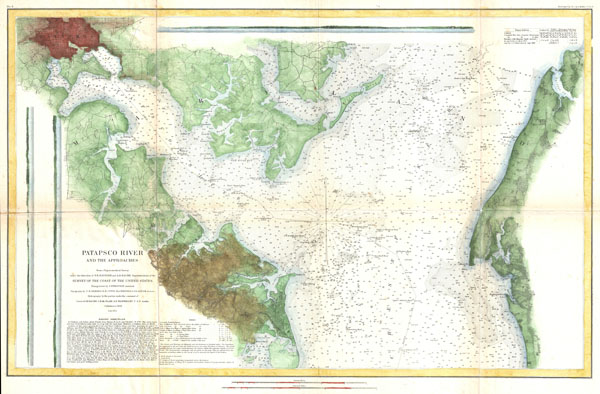 This is an uncommon 1856 U.S. Coast Survey Chart or Map of Patapsco River, the Chesapeake Bay, and approaches to Baltimore, Maryland. Covers from Baltimore in the northwest, eastward as far as Fairlee Creek, and southward as far as the Magothy River. Offers considerable detail throughout, but especially inland, where farms, roads, streets, and even some individual buildings are noted. Countless depth soundings throughout. Notes on tides, under sea dangers, and sailing instructions in the lower left quadrant.

The Triangulation for this survey was completed by J. Ferguson. The topography is the work of F. H. Gerdes, R. D. Cutts, H. J. Whiting, and J. B> Bluck. The Hydrography was accomplished by a party under the command of G. M. Bache, C. H. Mc Blair, and R. Wainwright. The construction of this chart was supervised by both A.D. Bache and F. R. Hassler, two of the most important and influential early superintendents of the U.S. Coast Survey. Published in the 1856 edition of the Superintendent's Report.

Report of the Superintendant of the U.S. Coast Survey, (1847 edition).