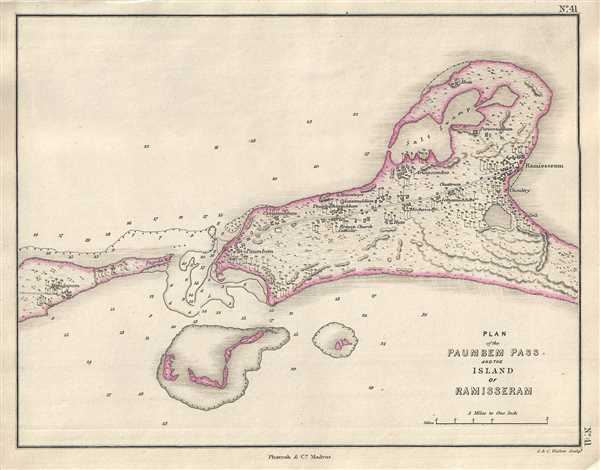 This is a beautiful 1854 Pharoah and Company map or plan of the Pamban Pass and Rameswaram Island on the south east coast of the India. Rameswaram Island is part of the Ranganathapuram district of in the south Indian state of Tamil Nadu located between peninsular India and Sri Lanka. The map is beautifully detailed and notes the cities of Rameswaram and Pamban. It also notes important buildings, elevation, and fields and renders the region with numerous palm trees. Depth soundings are also noted.

The famous Adam’s Bridge or Rama Setu, a limestone ridge, lies between Rameswaram and Mannar Island in Sri Lanka. The bridge is believed to have been above water until the 15th century, until a cyclone in 1480 broke it and the channel deepened. According to the mythological epic Ramayana, the bridge was built by Hanuman and the Vanara (ape men) army of Lord Rama from Rameswaram to reach Lanka and rescue his wife Sita from the evil king Ravana. Today the island is a pilgrimage destination for many Hindus.

This map was engraved by J. and C. Walker and issued as plate no. 41 by Pharoah and Company in their 1854 Atlas of Southern India.