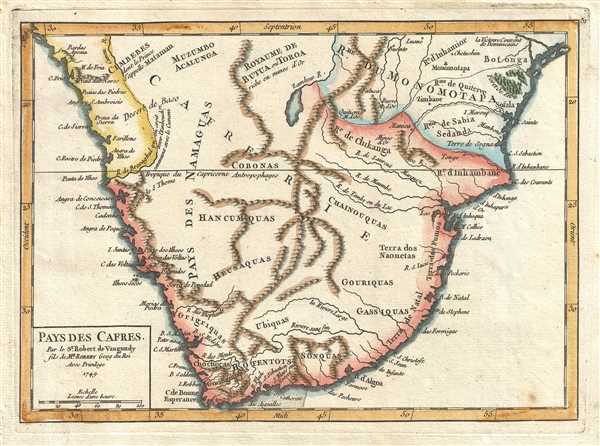 This is a hand colored 1749 Didier Robert de Vaugondy map of southern Africa. The map depicts the southern half to third of the continent of Africa pre-colonialism. Most the map is dominated by Cafrerie, a variation of the French word cafre. Used in southern Africa to refer to a black person, today the word is an offensive ethnic slur. Cafre is most likely derived from the Arabic work kafir meaning 'unbeliever' or 'non-Muslim' and was then adapted into Afrikaans by Dutch settlers. There are no regional divisions in this large expanse of land. Only tribal names are given, some of which are said to have 'country' ( pays des…). Mountain ranges and rivers snake across the open expanse of land, including the Zambeze River, and, near the Cape of Good Hope, a 'river without end (Riviere sans fin).

The Kingdom of Mutapa (Royaume de Monomotapa) is depicted. It existed from c. 1430 until 1760, when it disintegrated under a civil war. The 'winners' of the war governed a smaller kingdom until 1917 when the last king of the ruling dynasty was killed in battle against the Portuguese.