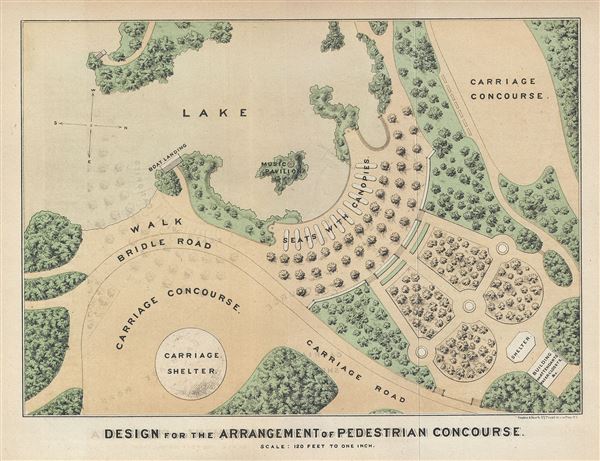 This is a rare 1871 example Vaux & Olmsted's map of part of Prospect Park, Brooklyn. His map focuses on the section of Prospect Park now occupied by Wollman Rink and the adjacent Concert Grove. Pathways, individual trees, pavilions, boat landings, seats, and fountains and depicted.

As with their most famous work, Central Park, Vaux and Olmsted were meticulous in their design of Prospect Park, with every tree, pond, and bench planned. Olmsted wrote: 'Every foot of the parks surface, every tree and bush, as well as every arch, roadway, and walk and been placed where it is for a purpose.' Today, because of Vaux and Olmsted's efforts, the citizens of Brooklyn have the privilege of enjoying a fine urban public recreation area in New York City.

This map was issued in 1871 as part of William Bishop's Manual of the Common Council of the City of Brooklyn.

Bishop, William, Manual of the Common Council of the City of Brooklyn, 1871.

Very good. Minor wear along original fold line. Some offsetting.
Looking for a high-resolution scan of this?