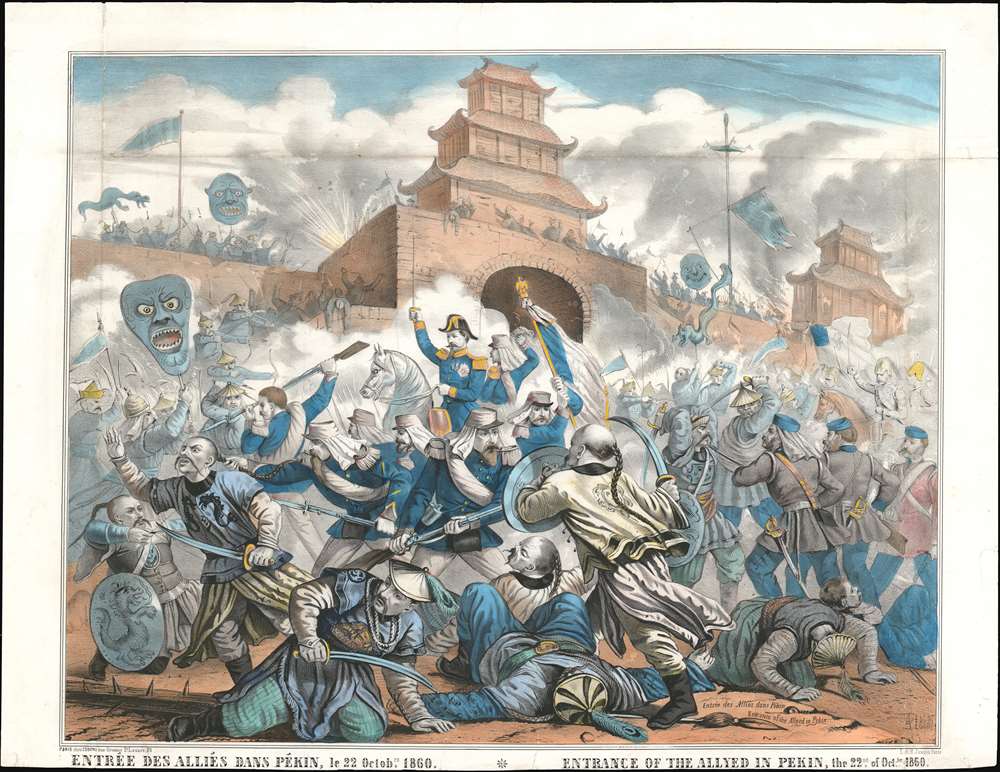 This is an 1860 Albert chromolithograph view of the Franco-British Expedition to China capturing the Summer Palace outside Peking (Beijing) on October 22, 1860, near the end of the Second Opium War (1856 - 1860). Brutal hand to hand combat fills the image. Chinese soldiers carry sabers while British and French soldiers are armed with rifles and bayonets. Chinese archers take aim from the city's walls. Other Chinese soldiers bear large portraits of fearsome demons. Chaos reigns and smoke obscures all but those in the foreground.

The Franco-British Expedition to China was the final action of the Second Opium War (1856 - 1860). The British and French occupied Canton (Guangzhou) since late 1857. A brief interlude took place from May 1858 until June 1859, when hostilities recommenced because the Chinese refused to abide by the humiliating terms of the June 1858 Treaty of Tianjin. Battles were fought in June 1859 and recommenced in summer 1860, when a joint-Franco-British force marched on Peking after landing nearly 18,000 troops near Beitang. This European army won a string of victories and soon the Xianfeng Emperor dispatched emissaries for peace talks, which was a delaying tactic. The British diplomatic envoy insulted his Chinese counterpart, leading to his kidnapping, torture and execution by lingchi, a brutal flaying procedure also known as 'death by a thousand cuts' and 'slow slicing'. After this diplomatic incident, the Europeans continued marching on Peking and winning military victories. The Emperor fled the city and left his brother to negotiate peace. While negotiations were going on, British and French troops looted both the Summer Palace and the Old Summer Palace. During this war, British and French troops never entered Beijing. Once peace was declared, the diplomatic prisoners (or what was left) were returned, and their condition enraged the British. In reprisal, British General Lord Elgin wanted to burn the Forbidden City, but it was deterred by a Russian envoy. A French diplomat convinced Elgin that burning the nearby Summer Palace was the appropriate, and 'least objectionable' response. The burning of the Summer Palace is remembered as of the great cultural losses in history, comparable to the sacking of the Great Library of Alexandria and the destruction of the Bamyan Buddhas.

This view was drawn by Albert and lithographed by Henri Jannin in 1860 and sold in Paris. This is the only known surviving example.

Henri Jannin (January 4, 1816 - 18xx) was a French lithographer and printer. Born in Lyon, Jannin opened his own printing firm in 1839. In 1841 he as put on trial for not printing his name and address on his products, and also for printing socialist propaganda lithographs. He was fined 6,000 francs in May 1850, but it was reduced to 1,000 in November. In 1864 and again in 1867, two major commissions were created by Jannin and then printed by another firm, suggesting that Jannin may have gotten out of the printing business sometime in the early 1860s. Learn More...

Striking image. Exhibits some wear along original fold lines and a few professional verso reinforcements.
Looking for a high-resolution scan of this?