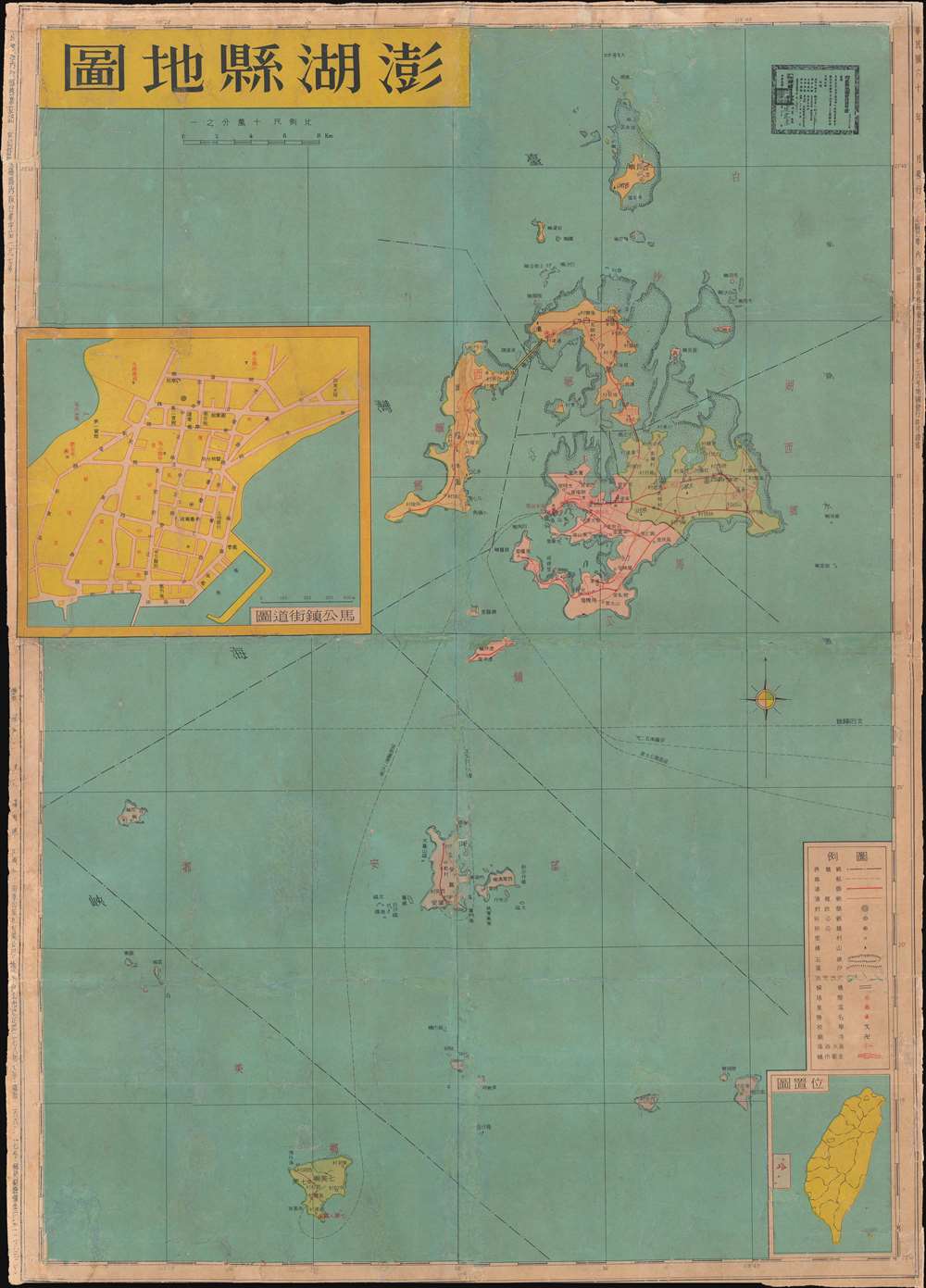 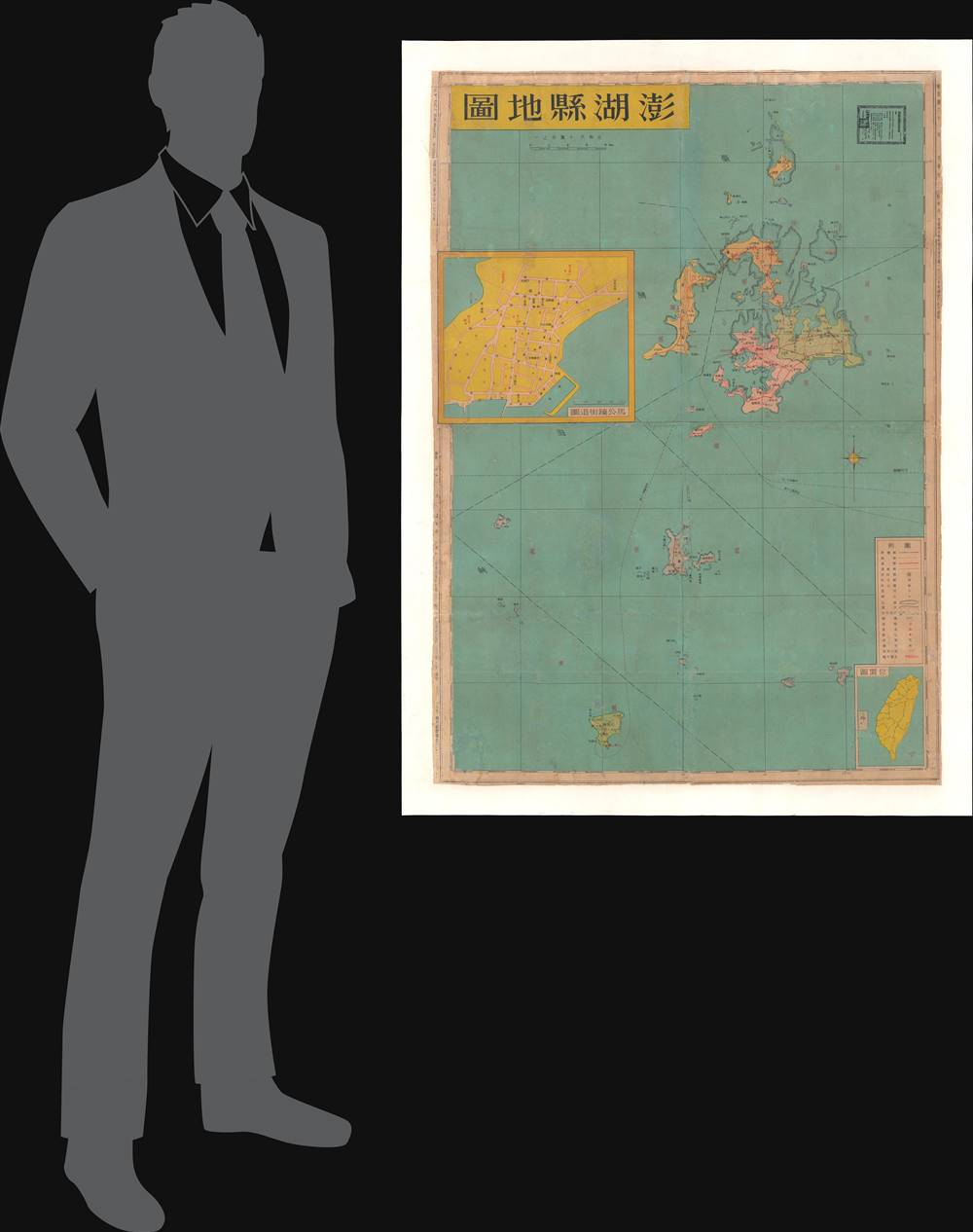 This is a c. 1971 Ch'en I-jen map of the Penghu Islands (also known as the Pescadores) in Taiwan (Republic of China). As it was being produced, the international context was rapidly changing and the Cold War tensions that had made the strategically-located Penghus a focus of international attention were decreasing.

This map presents the islands composing Penghu County (澎湖縣), Taiwan. It is unusually detailed in its focus on a relatively small set of islands, depicting individual islands and small islets, reefs, and shoals. Administrative divisions down to village (鄉) level are indicated. The legend includes symbols for a combination of geographic, administrative, and cultural features. At left is an inset map of Makung Township (or Magong, 馬公鎮), the largest settlement on the islands. A second inset map at bottom-right situates the islands in relation to the main island of Taiwan (Formosa). At top-right is a stamp of approval from the Ministry of the Interior (內政部), which was required both for reasons of accuracy and censorship. Taiwan was under martial law at this point and the government would have been anxious not to let any information of military significance become widely available.

Penghu on the Front Lines of Cold War Conflict

The recorded history of the islands in the Taiwan Strait dates to accounts of fisherfolk from the Chinese mainland travelling periodically to the islands in the Song Dynasty (10 - 13th centuries) and settling there in subsequent dynasties (although the indigenous Austronesian inhabitants of Taiwan had visited the islands, there appear to have been no permanent settlements). As with Taiwan itself, the islands became a battleground for a succession of competing powers, including the Portuguese, the Dutch, the Ming, the Zheng family (trader/pirates based in Fujian), the Qing, the French, and the Japanese. Finally, following the Second World War, Penghu, Matsu, and Kinmen became the front line of the unfinished Chinese Civil War, when the anti-Communist forces of Chiang Kai-Shek fled mainland China. Unlike Jinmen and Matsu, which are extremely close to the Chinese mainland and would be at great danger of immediate seizure in the case of a military conflict, the Penghus are closer to Taiwan (Formosa) and are very strategically important for control of the Taiwan Straits. With American assistance, these islands and Taiwan as a whole were fortified and developed in the 1950s and 1960s, building on an infrastructural base laid during the Japanese colonial period (1895 - 1945).

This map was made in a period when the major alignments of the Cold War in Asia were rapidly shifting, as American involvement in Vietnam decreased, Sino-Soviet tensions peaked, and the US and China moved towards rapprochement. The main sticking point in US-China relations was and remains the issue of Taiwan. Officially the Republic of China (ROC), the government on Taiwan is the descendant of a regime once located in Nanjing and led by 'Generalissimo' Chiang Kai-Shek that fled mainland China in 1949. Although the US government had never been enthusiastic about Chiang and was willing to let him fall in mainland China, the Korean War changed the outlook of the situation in Asia and Chiang (or at least Taiwan) came to be seen as an essential stronghold of anti-Communism. In 1954, the US and the ROC signed a mutual defense treaty and twice in the 1950s tensions over Taiwan almost led to a war between the US and the People's Republic of China (PRC). In a sense, the Chinese Civil War did not end in 1949 but continued for years afterwards, with active espionage, sabotage, and shelling, especially around Kinmen, Matsu, and Penghu.

By the early 1970s, the situation had changed significantly, as the PRC was consumed by domestic political turmoil and conflict with the Soviet Union, which it came to regard as a threat equal to or greater than that posed by the US. The US also saw the Soviet Union as its greatest competitor and thus the logic for Sino-US rapprochement was clear. Over the 1970s, the ROC was increasingly diplomatically isolated, losing China's seat at the United Nations to the PRC, and losing recognition from an increasing number of countries that moved their embassies to Beijing, with the US doing so in 1979. These moves were premised on the 'One China Policy,' stating that Taiwan is a part of China and that the governments in Beijing and Taipei simply disagreed on what form of government should rule China. The US asked for guarantees from the PRC that the dispute would be resolved peacefully and (with Congressional prodding) has continued to supply the ROC with military equipment, a remnant of the Mutual Security Treaty, while also discouraging any formal declaration of independence by Taipei.

Chiang Kai-Shek died in 1975, opening the door for the gradual relaxation of martial law and anti-Communist dictatorship. In the intervening decades, Taiwan has become an economic dynamo and a thriving democracy, and in the past twenty years has deepened economic and cultural integration with the mainland. But few Taiwanese are enthusiastic about political integration with the mainland, and the ROC's future remains precarious under the threat of growing PRC military capabilities.

This map was made by Ch'en I-jen (陳逸人) and published by Wei Nan-hua (魏南華) of the Nan-hua ch‘u-pan-she (南華出版社). The date is unclear. The Ministry of the Interior's stamp of approval in the upper-right corner states that the first edition of this map was published in June 1964 and appears to show a publication date for this edition in the 1960s. However, the date template in the right-hand margin begins with 197_ (中華民國六十_年_月), suggesting that this was published sometime in the 1970s. Various editions of this map are held by the Library of Congress, Princeton University, Cornell University, the University of Utah, and the Bayerische Staatsbibliothek. It likely was part of the series Maps of Each County in Taiwan Province (台灣省各縣地圖), published in multiple editions from 1964 to the early 1980s, and the Ministry of the Interior's stamp suggests that it more specifically was published in conjunction with a map of Taitung County (臺東縣地圖).

Ch'en I-jen (陳逸人; fl. c. 1964 - 1987) was a cartographer based in Taiwan who primarily made maps of Taiwan's cities and counties, though he occasionally forayed into other subjects, such as such as Malaysia. His major achievement was collection of maps of counties in Taiwan (台灣省各縣地圖), published by Nan-hua ch‘u-pan-she (南華出版社) in several editions in the 1960s and 1970s. Learn More...


Nan-hua ch‘u-pan-she (南華出版社; fl. c. 1937 - 1993) was a publisher of maps and books originally based in Shanghai that relocated to Taipei in the late 1940s. Its maps mostly focused on Taiwan, while its books covered a wide range of topics, primarily in the fields of geography and politics. The company was operated and likely named after Wei Nan-hua (魏南華). Learn More...

Average. Significant wear and infill to loss along old fold lines. Stabilized and laid on linen.