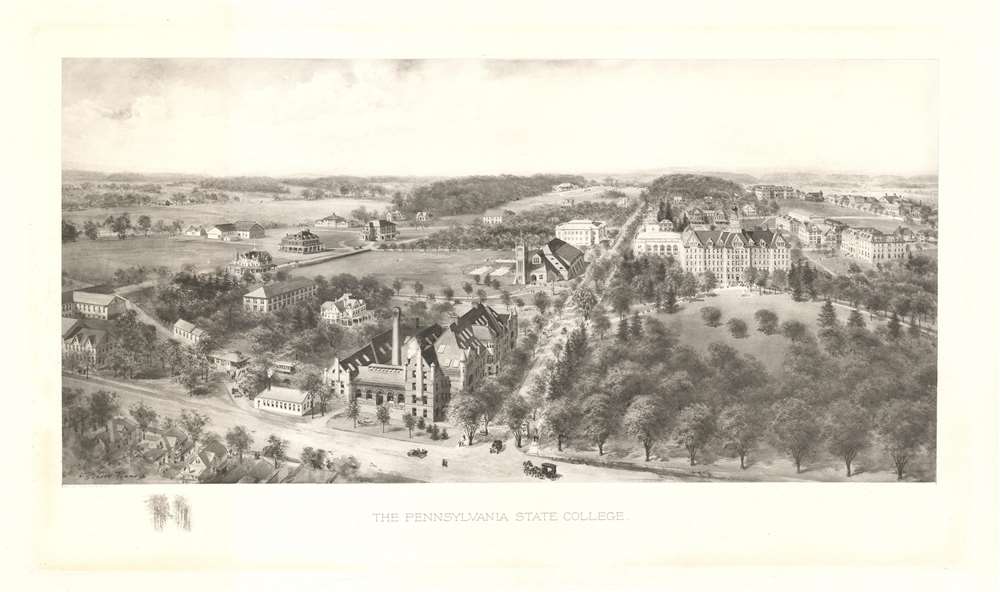 This is a 1910 Richard Rummell view of The Pennsylvania State University, popularly known as Penn State. Illustrating what was then the Pennsylvania State College from the southeast, Allen Street Mall bisects the view and, it should be noted, was still open to traffic at the time. The original Old Main is instantly recognizable just to the right of The Mall overlooking Old Main Lawn. Built in 1863, the original Old Main contained classrooms, laboratories, offices, a chapel, and rooms for 400 students. The building was deemed structurally unsound in the 1920s and razed in 1929. It was rebuilt in 1930, and the Old Main building that stands on campus today occupies the same piece of real estate where the original Old Main stood. Schwab Auditiorium is illustrated just behind and to the left of Old Main. Across The Mall from Old Main stands the Armory, which was originally constructed in 1892. This building housed the physical education facilities, as well as places for varsity athletics and other social events. It also served as the base of operations for the college's Cadet Corps, which was required of all male students until World War I. The Carnegie Building, built in 1904, stands behind the Armory and is currently occupied by Penn State's College of Communication and the Daily Collegian. Other buildings that still stand on campus today that are illustrated here include Old Botany, Ihlseng Cottage, and the McAllister Building. The large building in the foreground just to the left of center is Old Engineering, constructed in 1893 for the college's new engineering program. Unfortunately, the building caught fire and burned down in 1918 and Sackett Hall now stands in its place.