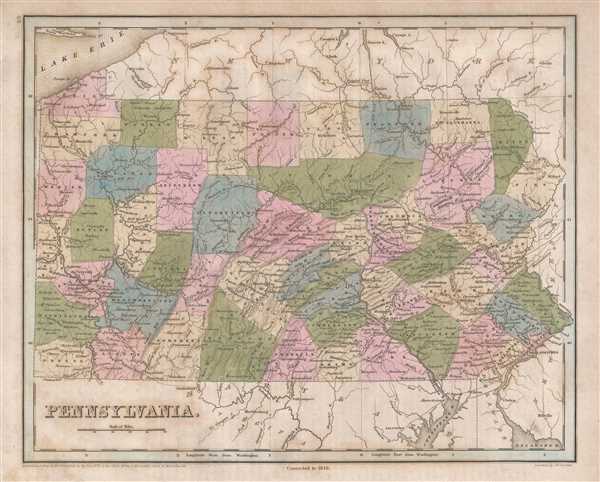 Illustrates the network of railroads and canals connecting Philadelphia and Pittsburgh.
$250.00

This is an 1846 Thomas G. Bradford map of Pennsylvania. The map depicts the region fromOhio to New Jersey and from Lake Erie and New York to Virginia. As is the case with the majority of the maps included in A Universal Illustrated Atlas, the transportation network in Pennsylvania is illustrated and includes system unlike any other in the country at the time. Power-brokers in the state wanted a way to transport goods between Philadelphia and Pittsburgh, a distance of nearly 400 miles. Instead of concentrating on one form of transport, i.e. canal or railroad, they decided to use both. What Bradford labels the 'Grand Trunk' line is a mix of canals and railroads covering the distance between Philadelphia and Pittsburgh, utilizing the most effective method of transportation for the terrain. Other canals and railroads were built in other parts of the state, even connecting the Pennsylvania transportation network with that of New York, including the Erie Canal.

Highly detailed, each county is illustrated, labeled, and shaded a different color to allow for easy differentiation. Numerous towns and villages are labeled, including Philadelphia. Pittsburgh, Williamsport, and Harrisburg. The Susquehanna, Allegany, Youghiogheny, and Monongahela Rivers are all illustrated, along with myriad other smaller rivers and creeks.