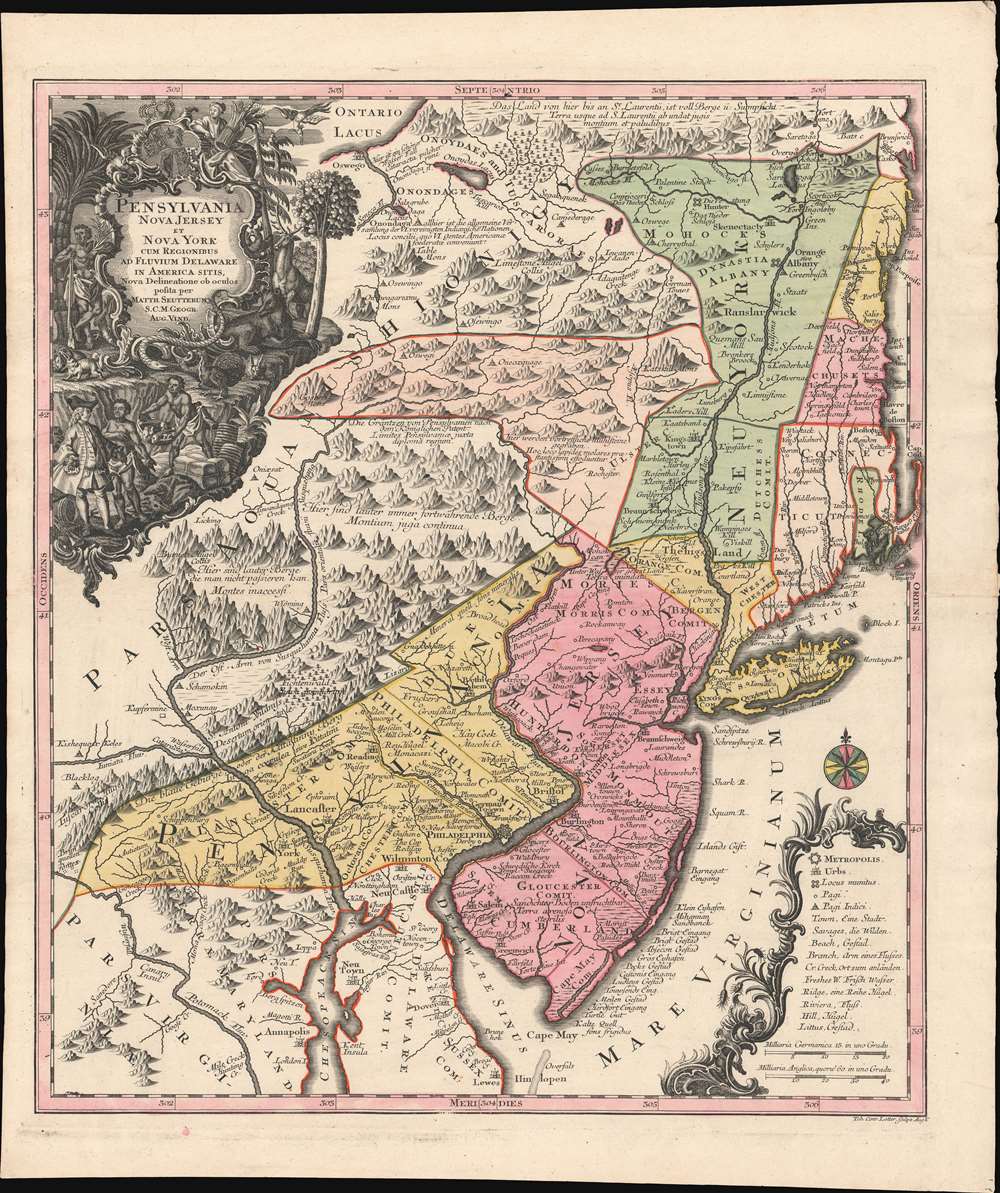 A land of plenty.

A c. 1750 example of Matthäus Seutter's map of the Middle Atlantic and New England regions during the British colonial period. It encompasses the Middle English Colonies, particularly New York, New Jersey, and Pennsylvania, capturing a period of rapid westward expansion and encouraging German emigration and settlement.

Cartographically, this map is heavily based upon the unobtainable 1749 Lewis Evans Map of Pennsylvania, New Jersey, New York, and the Three Delaware Counties. Although the lesser known of Evans' two maps, this was a significant work, being the first published map of the rural regions of eastern Pennsylvania and New York to benefit from actual survey work.

With German immigration to America, particularly to the Lancaster region (Amish), there was a high demand in German markets for an accurate regional map. The Evans map was thus immediately pirated by an unknown Frankfurt publisher as, 'Special Land Charte von Pensilvanen...' The Frankfurt map was itself pirated in the same year by Matthäus Seutter and his son-in-law Tobais Conrad Lotter. While, neither Evans' map nor the Frankfurt variant achieved wide distribution and had extremely limited print runs, the prosperous Seutter firm disseminated it to a broad audience - marking this as the first generally available map to introduce the Middle Atlantic interior to a wide European audience.

The image presented would have been enticing to the potential German immigrant. Wide navigable rivers penetrate deep into the interior. Mountains give way to fertile forests and valleys. Rich mines are readily available. The interior is dotted with accessible American Indian settlements - ready trading partners for the acquisition of pelts and other natural treasure. Moreover, German settlements on the Susquehanna and Hudson River tributaries were already established and - so the map would suggest - thriving.

The striking title cartouche in the upper left further drives home the map's message. It depicts William Penn, the founder of Pennsylvania, but also a Quaker (and thus religious outcast) and a pacifist. Penn is surrounded by flora and fauna - turkey, deer, rabbits, etc… and is shown trading on friendly terms with indigenous Americans. Unlike more traditional militantly themed cartouches, this large and imposing image communicates, peace, prosperity, and bounty.

Seutter expanded coverage over the Evans map to offer broader regional context. Unlike the Evan's source, Seutter incorporates New England and the British colonies of Rhode Island, Connecticut, Massachusetts, and New Hampshire. These areas are disproportionally reduced in size - doubtless intentionally - likely both to emphasize the vast 'unclaimed' inland territories, as well as to provide a more general regional context stressing access to New England commercial and maritime centers.

This map is undated, but was likely first published in 1749-50. It was engraved by Tobias Conrad Lotter, Matthäus Seutter's son-in-law and soon-to-be heir. The map proved popular and enjoyed a long print run with multiple variant states. The present example is likely an early if not first state - bearing the Seutter imprint in the cartouche and Lotter's engraver signature in the lower right, just outside the border. The plate was used hard, and consequently many examples exhibit weak impressions and fuzzy printing - particularly in the densely engraved cartouche which suffered the greatest wear. Not so here, this fine impression exhibits the virtues of an early strike off the plate - e.g. crisp, sharp high-contrast lines. In 1756, following Seutter's death, Lotter replaced Seutter's imprint with his own, leaving the map otherwise unchanged. The map appeared both separately and in various editions of Seutter's Atlas Novus and Grosser Atlas. It is well represented institutionally but rarer in early states with the Seutter imprint.