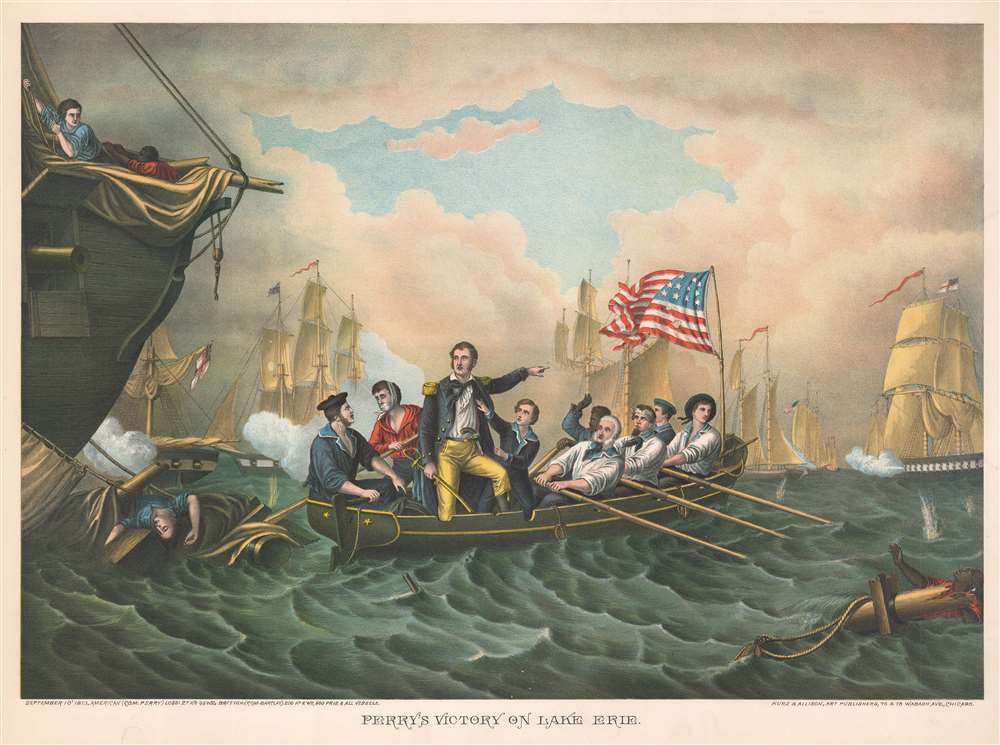 This is a c. 1889 Kurz and Allison chromolithograph view of the Battle of Lake Erie during the War of 1812. The view captures the moment when Master Commandant Oliver Hazard Perry (1785 - 1819) transfers his flag from the stricken USS Lawrence to the USS Niagara to continue the battle. Perry is illustrated standing, while members of his crew row the small boat across the lake to the Niagara. Among these men is one black man. He is Cyrus Tiffany, Perry's personal servant, who is said to have accompanied Perry during the transfer to Niagara. The stricken Lawrence appears along the left border, while both American and British ships fire at each other in the background.

The Battle of Lake Erie

The Battle of Lake Erie, fought on September 10, 1813 during the War of 1812, was one of the biggest naval battles of the war and proved to be a pivotal American victory. Perry was given command of the squadron at Presque Isle, Pennsylvania, earlier in 1813 and oversaw the construction of both the Lawrence and Niagara. After the British blockaded Presque Isle for ten days in July 1813, Perry sortied his squadron from Presque Isle in search of a more accessible anchorage, which he found at Put-in-Bay, Ohio. On the morning of September 10, upon seeing the British approaching, Perry organized his squadron in a line of battle and engaged the Royal Navy squadron. Perry's flagship, the Lawrence sustained heavy damage, so much so that he had to transfer his command to the Niagara. After the surrender of the Lawrence, the British expected the Americans to retreat. However, Perry captained the Niagara and the rest of his force toward the already damaged British ships and engaged them once again. Not long after, the entire British squadron (two ships, two brigs, one schooner, and one sloop) surrendered to Perry, giving the Americans complete control of Lake Erie. In his letter informing Major General William Henry Harrison of the victory, Perry wrote his now famous words, 'We have met the enemy and they are ours'.

This view was created and published by Kurz and Allison c. 1889. This view is not cataloged in OCLC and we note only one cataloged example in an institutional collection at the National Museum of American History. We note a handful of instances when the view has appeared on the private market.

National Museum of American History 60.3286.
Looking for a high-resolution scan of this?