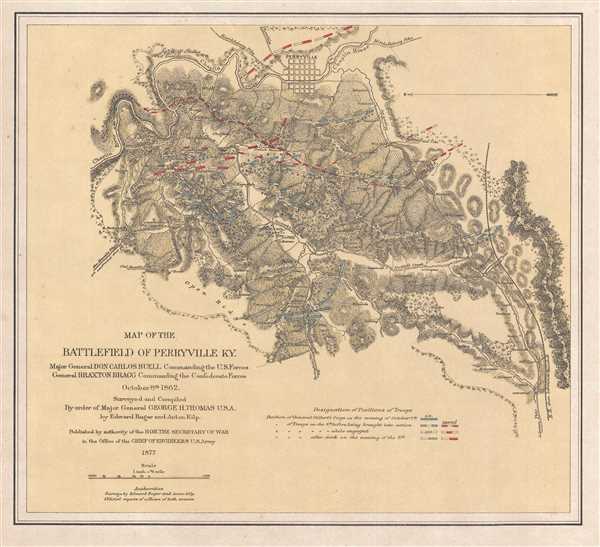 Recognized as being among the most important historic maps of Kentucky.
$175.00

Recognized as being among the most important historic maps of Kentucky, this is an 1877 Edward Ruger and Anton Kilp map of the battlefield in the vicinity of Perryville, Kentucky. The map depicts the region from the Chaplin River to the proposed railroad from Lebanon to Stanford (we say proposed because the railroad had not been built when the map was made) and from Perryville to an open ridge west of town. The largest Civil War battle fought in Kentucky, the battle took place on October 8, 1862, and was fought in the Chaplin Hills west of Perryville. Also known as the Battle for Kentucky, it is considered to be a strategic Union victory, since Confederate General Braxton Bragg withdrew to Tennessee soon afterward. Ruger and Kilp , who surveyed and compiled the work, employed an incredible amount of detail and illustrate not only the positions of the opposing armies at the beginning of the engagement, but how the battle progressed. By using different color schemes, Ruger and Kilp differentiate between the positions of different units on different days, allowing for the viewer to get some understanding of the flow of battle. The few roads in the area are also illustrated, along with creeks, rivers, and various landmarks, all of which are labeled.

This map was surveyed and compiled by Edward Ruger and Anton Kilp and published in 1877.


Anton Kilp (18-- - 1876) was a German-American cartographer who fought in the American Civil War. Kilp and his wife Franciska fled Germany in 1849 and came to the United States. He joined the Union army and reached the rank of Captain before the end of the war. He served mainly as a cartographer and as an aide to General Peter Osterhaus, another German refugee. He and his wife moved to Washington, D.C. after the war, where Kilp found a job as a cartographer with the U.S. Land Office, where he worked until his death. The Kilps had at least two daughters, Mim and Pauline.