1851 Black Map of Persia and Afghanistan 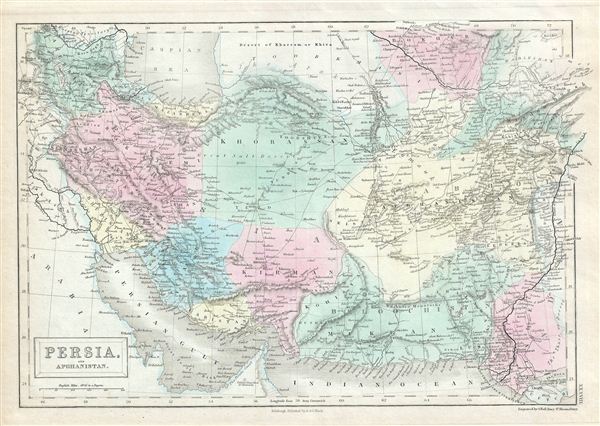 1851 Black Map of Persia and Afghanistan

This is a fine example of the Adam and Charles Black's 1851 map of Persia and Afghanistan. Centered on Yazd (Yezd) in modern day Iran, the map covers Iran, Afghanistan and parts of Pakistan, Iraq, India and Turkmenistan. It is curious to note that the northern borders of Persia, east of the Caspian Sea, are indistinct and suggestive of a general lack of knowledge regarding central Asia in the middle 19th century. Persia at this time was controlled by the powerful Qajar Dynasty of Shahs. Various towns, cities, rivers, mountains and several other topographical details are noted with relief shown in hachures. This map was engraved by Sidney Hall and issued as plate no. XXXVIII in the 1851 edition of Black's General Atlas of the World.