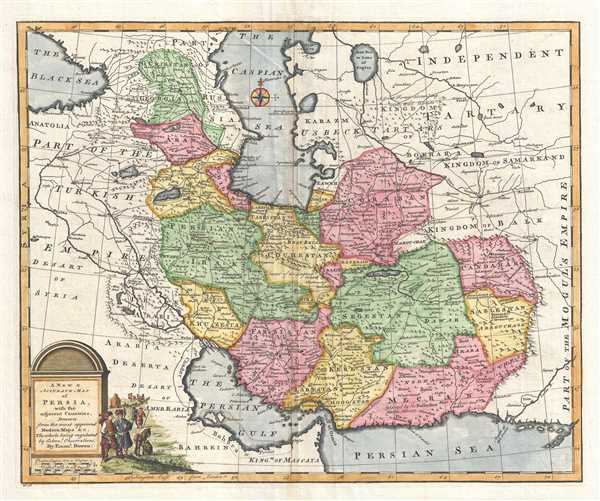 This is a 1747 Emanuel Bowen map of Persia. An advanced map for the era, it depicts the region from Turkey (Anatolia) and Black Sea to Central Asia and the Indus River and from the Caucasus, the Caspian Sea, and Central Asia to the Arabian Sea, the Persian Gulf, and Arabia and comprises such modern-day countries of Iran, Iraq, Afghanistan, Pakistan, Russia, Georgia, Armenia, and Azerbaijan. Within Persia, provinces are illustrated, labeled, and shaded different colors to allow for easy differentiation. Myriad cities, towns, and villages are labeled throughout, including Mosul, Baghdad, Ispahan, Kandahar, and Kabul. Rivers are illustrated, including the Tigris and Euphrates, along with mountains throughout the entire map. To the west of Persia, part of the Turkish Empire is illustrated, complete with cities, roads, rivers, and mountains. The city of Palmyra is present, along with Mosul and Baghdad. A decorative title cartouche, featuring a scene of a traveling caravan, is situated in the lower left corner.

This map was created and published by Emanuel Bowen in 1747.