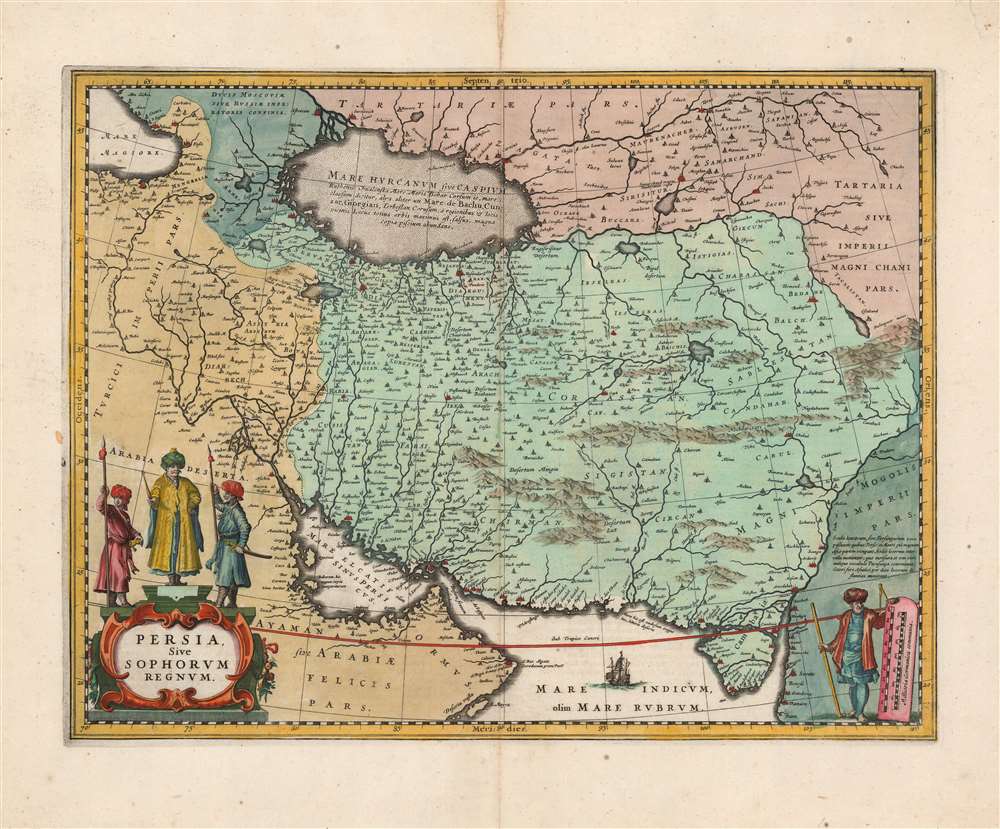 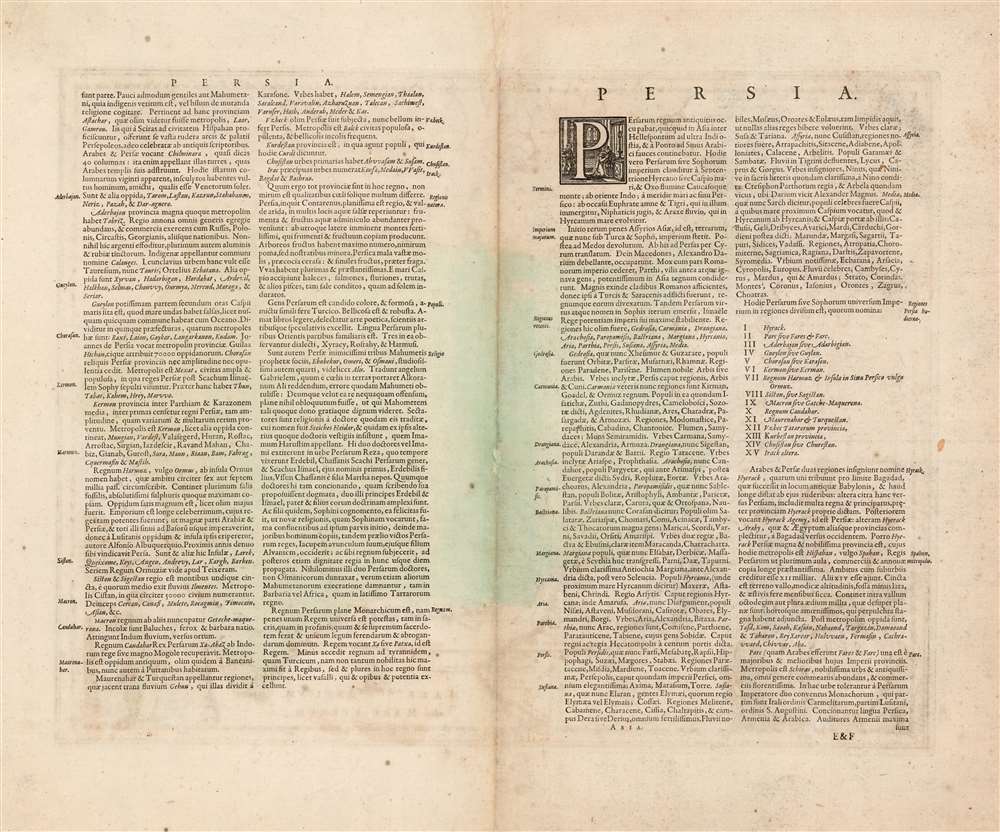 This is a classic 17th-century Dutch map of the Kingdom of Persia in a beautiful, original-color example printed by Jan Jansson, for inclusion in the 1648 Latin edition of his Atlas Novus. This is one of the most beautiful Dutch Golden Age maps of Persia.

The map is centered on the Persian Empire under the Safavid dynasty, extending eastwards to the Indus River, beyond which the Mogol empire held sway. To the west, the Fertile Crescent and Arabia are shown as part of the Ottoman Turkish Empire. The Caspian Sea is shown in the fat, ovoid form first appearing in the geography of Claudius Ptolemy. This model was not be replaced until the end of the 17th century, and the Caspian Sea was not correctly depicted on a map until the 1720s. The southernmost extents of the Grand Duchy of Muscovy can be seen in the Caucasus, northwest of the Caspian. The lands west of the Volga are dominated by Tartaria: the empire of the Great Khan. The map is drawn on a long-lived geographical model, only slightly changed since the mid-sixteenth century. Although, Jansson's map was largely derived from that of his competitor Blaeu, his map was based on those of Hondius and Ortelius - and theirs found their detail primarily in that of Giacomo Gastaldi's 1559 Il Disegno Della Prima Party Del Asia. Gastaldi's seminal map captured Persia during the first century of the Safavid Dynasty (1501 - 1736). Happily for the mapmakers that followed, the same dynasty remained in power until 1736 and thus arguably the Flemish and Dutch successors to Gastaldi's map were at the very least no less obsolete.

While spare in decoration - the Indian Ocean features a single ship - it is nevertheless a beautiful engraving. The mountains of central and eastern Persia are shown pictorially. The region's inland seas and lakes are distinctively stippled and shaded. In the lower right, the map's scales are presented on a tablet, supported by a turbaned geographer, so identified by his rod and calipers. The central figure over the map's title cartouche most likely represents Shah Abbas the Great (1571 - 1629) flanked by two guards.

Keeping Up with the Joneses

Jansson and his brother-in-law Jodocus Hondius, were in fierce competition with fellow Amsterdam mapmaker Willem Blaeu. Each firm kept a close eye on the others' work, doubtless made simpler by the situation of both on the same street. As a result, there are many instances of one shop producing maps based on (or copied, lock-stock-and-barrel) from those of the other. With respect to this map, Blaeu's came first (appearing 1634). Jansson copied the geographical detail precisely, and went so far as to reproduce the decorative cartouche. Instead of replicating Blaeu's scales in the Arabian Peninsula, Jansson has the scales presented in a decorative frame in the lower right in place of the Blaeu's dedicatory cartouche.

This map was engraved by Jan Jansson in 1636, replacing Hondius' map of 1606. It would remain in Hondius/Janssonius atlases throughout their publication history. Different editions of the atlas appear in various institutional collections, but the separate map is cataloged only by the Sachische Landesbibliothek and the National Library of Wales.

Jansson, J., Atlas Novus, (Amsterdam) 1646-58.     Mercator's Atlas is one of the most important works in the history of cartography. Although in fact Ortelius was the first to publish a proper atlas, the Teatrum Orbis Terrarum, Mercator's Atlas the first book to employ the term Atlas for a collection of maps. The term is derived both from the mythical titan, Atlas, who was forced to bear the world upon his shoulders, and the Libyan king, philosopher, and astronomer of the same name that, so the legend goes, constructed the first globe. Mercator dedicated the final 25 years of his life to compile the Atlas. He published two parts during his lifetime in 1585 and 1589, but the final part published posthumously by his son Rumold Mercator, in 1595. The map plates for the Atlas were later acquired by Jodocus Hondius who published the most complete and well known edition in 1606. It was Jodocus who popularized the Atlas and who did the most to elevate Gerard Mercator's work.