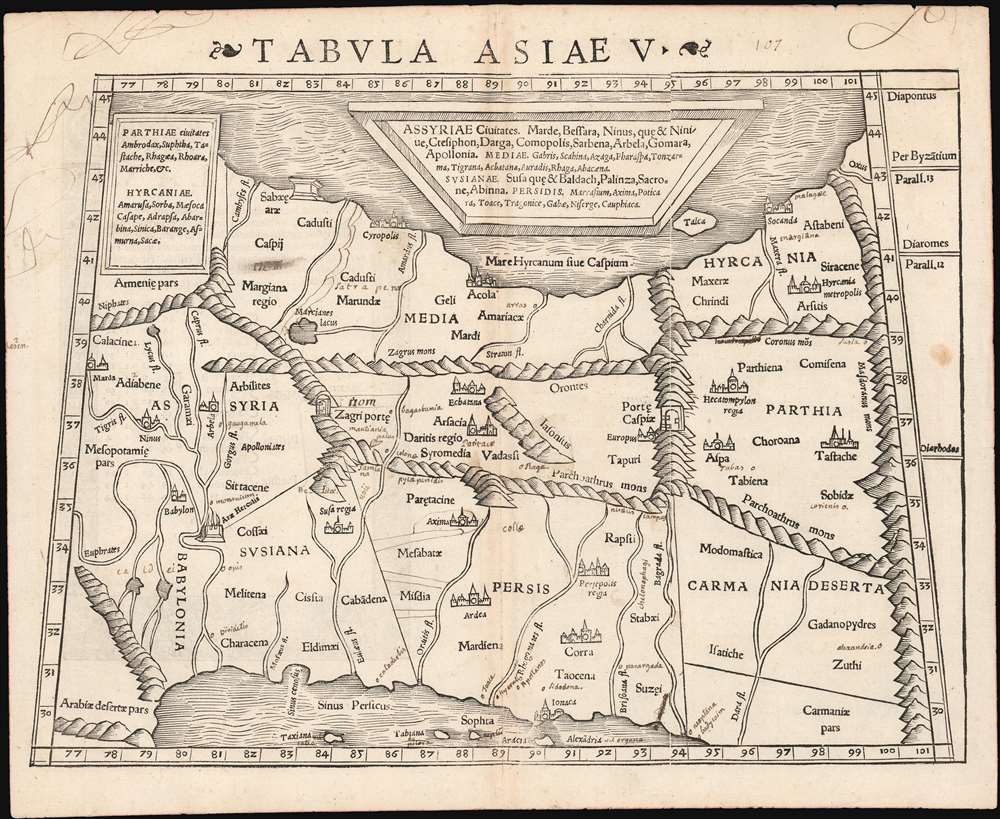 This is a 1542 example of Sebastian Münster's Ptolemaic map of Persia, the fifth of Ptolemy's Asia maps. The map covers modern-day Iraq and Iran, extending from the Fertile Crescent to the desert south of the Caspian Sea. In the 1st and 2nd centuries CE, these territories were occupied by the Persian Empire, and its vassal kingdoms Carmania, Hyrcania, Parthia, Media, Assyria, Susiana (Elam), and Babylonia. The western limit of the map is marked by the Tigris and Euphrates Rivers; and the eastern by the Masdoranus Mountains (roughly corresponding to the Eastern Iranian Range). The map is bordered on the south by the Persian Gulf, and on the north by the southern shores of the Caspian Sea (then conceived as a wide and oval).

Ptolemy's understanding of these lands was spotty at best. The map nonetheless, includes important factual elements. For example, the map names the Zagri Porte, here illustrated as a gate, but in fact an important pass through the Zagros Mountains (modern Iran-Iraq border). Further east, another gate, the Porte Caspie corresponds to another natural pass, this time through the Elburz Mountains dividing the northern parts of Persia from Parthia. Today, a superhighway from Tehran to Mashad runs through this same pass.

This map appeared in Sebastian Munster's modernized Ptolemy, first printed in 1540. Further editions appeared in 1542, 1545, and 1552. Münster's publisher, Petri, repurposed the Ptolemaic maps for use in a 1571 edition of Strabo. The typography of this example is consistent with known examples of the 1542 edition. It is the second of five known states of the map. Three examples of the separate map appear in OCLC in various editions; the entire book is held by a number of institutions.