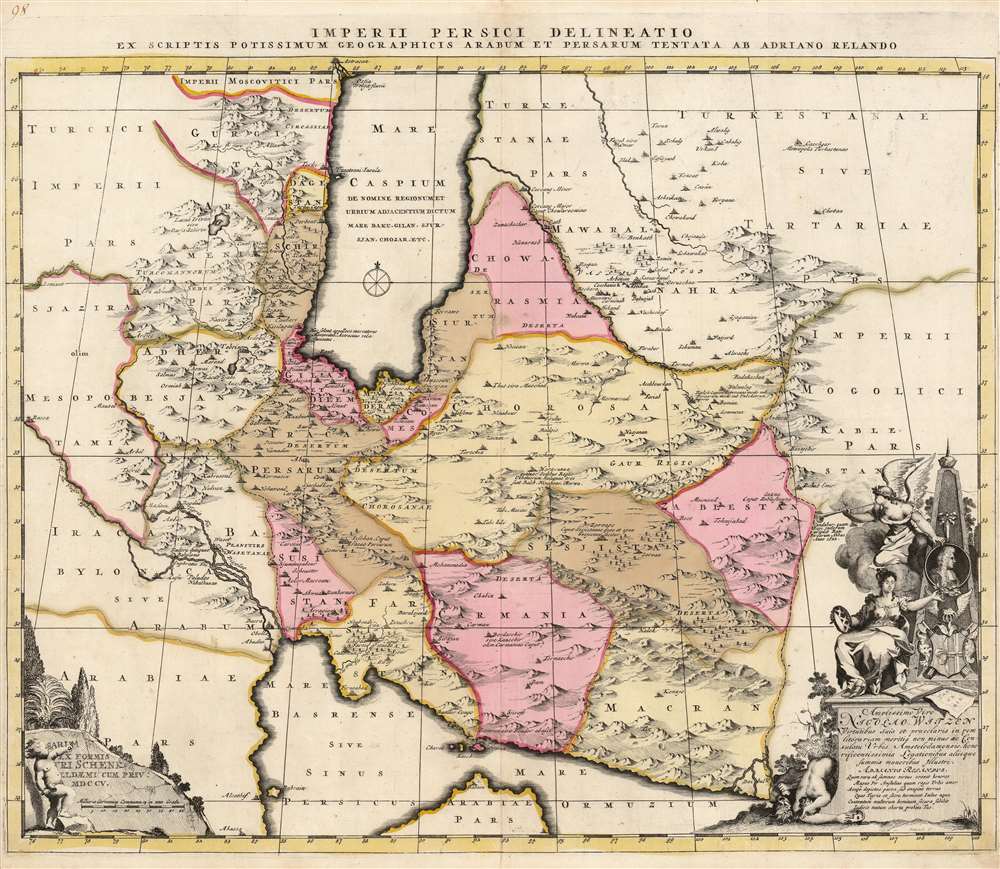 This is a beautiful, original-color example of Adrian Reland's map of the Persian Empire, in its 1705 first printing, engraved and published by Peter Schenk. It is one of the most detailed maps of Persia of the turn of the 18th century, reconciling Persian mapping with existing Dutch maps. It is one of the first maps to correct the orientation of the Caspian Sea along its proper north-south axis. It is also the first map to accurately present Persian toponymy to the European audience.

Reland's subtitle indicates the map was 'drafted from the most capable Persian and Arabic geographers,' although he does not specify which. Reland's sources for his 1714 Palestine map drew on the tables of Alfaras, Ibn Said and Al-Bīrūnī, so his sources for the Persia are likely to be as well informed. Al-Bīrūnī's data in particular provided a foundation for European cartography of Persia. Reland's map, thus accurately presents Persian toponymy to a European audience for the first time. The advances of this map are not confined to the place names. It is one of the first maps, if not the first map, to accurately portray the Caspian Sea in its north-south oblong shape. This may derive from the map's wealth of data to the east of the sea, in areas where earlier maps had envisaged as covered by the Caspian. Persia's eastern limits are illustrated, abutting the Mogul Empire and Turkestan. Throughout, mountains appear pictorially; forests and wetlands are indicated as well. Regional capitals are noted, often with descriptive texts. These include Isfahan (Isfehan, Caput Iracae Persarum, 'Isfahan, Capital of Persian Iraq') and Kandahar (Candahar quam Regi Indorum eripuit Rex Persarum Abbas Anno 1622, 'Kandahar, which Abbas King of the Indians rescued from the King of Persia in the year 1622').

In the lower left, the map's scale is accompanied by an ingenious presentation: a putto, his hair flying with effort or wind, vigorously chisels Schenk's imprint and privilege into a battered wall, with trees in the background. Schenk engraved the map personally and the, 'Schenk Fec.' imprint appears under the dedicatory cartouche.

The map is dedicated to Nicolaes Witsen (1641 - 1717) who in addition to his roles as scholar, diplomat, writer, and businessman, held the powerful position of Amsterdam's mayor thirteen times between 1682 and 1706. A better choice for a map's dedicatee could scarcely be imagined. Witsen was an influential cartographer in his own right, having produced one of the most important cornerstones of northeastern Asian geography of the 17th century in his map of Tartary, his descriptions of Siberia, and his reportage of Martin Gerritsz Vries' exploration of the Sakhalin coast. The allegorical dedicatory cartouche focuses on a medallion bearing Witsen's profile, affixed to a monument above the Witsen coat of arms. At the base of the monument upon a plinth is an open atlas, and a loose, rolled map of 'Tar= Ta= Ria.' To the side, a winged avatar of Fame blows her trumpet while indicating Witsen's portrait and a seated, feminine and most fertile representation of the city of Amsterdam presents a laurel wreath of triumph to Witsen's image. The base of the monument bears Latin dedicatory inscriptions both to Witsen and to the map's geographer, Adriaan Reland. Witsen is praised for his virtue, literary merits, and his roles as a politician and ambassador. Meanwhile, Reland is hailed not only for the qualities of the map Schenk reproduces here, but also its effect: that the country depicted in it 'will face the contempt of many people, without fear'. At the bottom of the plinth before a background of foliage are two figures crumpled in defeat: a serpent-coiffed gorgon, and a naked, feminine figure covering her head with one arm, a mask in her outstretched hand. In the context of the dedication to Reland, the meaning of the image comes clear. Persia herself is unmasked, and by the unmasking, she is defeated - and with her the gorgon, an avatar of fear.

The map was engraved by Peter Schenk for inclusion in the 1705 edition of his Atlas Contractus. We see perhaps twenty examples cataloged in institutional collections, and the map appears on the market from time to time.


Adriaan Reland (July 17, 1676 - February 5, 1718) was a Dutch orientalist scholar, cartographer and Philologist. Despite never having personally traveled beyond the Netherlands, Reland's work contributed materially to European understanding of Asian linguistics and cartography. His father was a minister; his elder brother a Haarlem lawyer. At 17 he began study of theology and philosophy at University of Utrecht; an early interest in Biblical languages led to a study in Arabic. By the time of his gaining a professorship in 1699 he was fluent in Arabic, Hebrew, and other Semitic languages, and would become Professor of Oriental Languages in 1701. He became famous for his early work in the field of comparative linguistics, and the comparative study of Persian myths with respecrt to the Old Testament. He was the only important scholar of the Persian language during his lifetime. By 1708, his linguistic work had reached beyond comparative Biblical languages, to embrace the study of Malay language and the languages of the Western Pacific as recorded by Schouten and Le Maire. Reland produced in 1705 De religione Mohammedica libri duo , the first objective survey of Islamic belefs and practices.