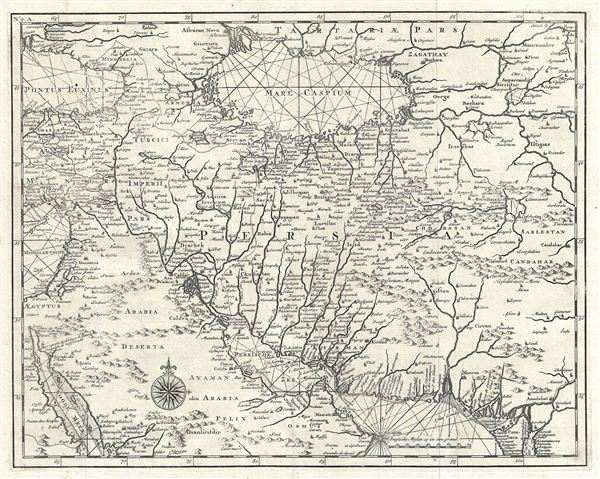 This is a rare 1726 map of Persia by Francois Valentijn. It covers from the Gulf of Suez eastward to Ahmedabad (Amadabad) in modern day western India. This map, centered on Persia, includes the Caspian Sea and part of the Arabian Peninsula. The map is highly detailed, noting numerous rivers, towns, islands and mountains beautifully rendered. Undersea features are also displayed in detail.

The most interesting feature here is the mapping of the Caspian Sea. This map, based on the earlier 1634 Blaeu map of Persia, depicts the Caspian in a bulbous horizontal form based upon the cartography of Alexandrian geographer Claudius Ptolemy. It was only in 1718, when Russian Tzar Peter the Great sponsored the cartographic expedition of Dutch navigator Carl Van Verden who presented the accurate mapping of the Caspian Sea, offering a new perspective on the region and opening the navigational possibility of the world's largest lake.

This map was issued as part of Oud en Nieuw Oost-Indien in 1726.