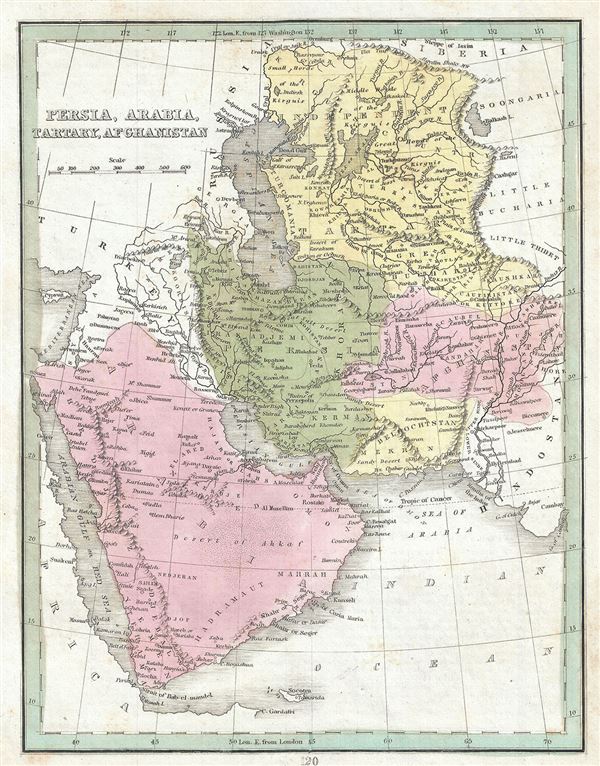 This is a fine 1835 map of Arabia and Persia by the important American mapmaker T. G. Bradford. Detailing the declining years of the Ottoman Empire, this map is centered on Persia, and covers from Suez east as far as the Gulf of Cambay and India and from Siberia south to the Gulf of Aden. It includes the modern day nations of Saudi Arabia, Yemen, Oman, Iran, Afghanistan, Turkmenistan and Uzbekistan along with parts of Pakistan and Kazakhstan. Bradford notes several ruins, including the Ruins of Persepolis and the Ruins of Babylon. Towns, rivers, mountains, islands and various other important topographical details are noted and regions and territories are color coded. Persia at this time was controlled by the powerful Qajar Dynasty of Shahs.

The map was published as plate no. 120 in Thomas G. Bradford's 1835 Comprehensive Atlas Geographical, Historical and Commercial.  Bradford's atlas, published in 1835 was an important work on many levels.  First, it was one of the first American atlases to follow an encyclopedic format, offering readers extensive geographical and statistical tables to supplement the maps themselves.  Second, it was published in Boston and influenced the city's rise as a publishing center later in the 19th century (at the time most publishing in the United States was restricted to New York and Philadelphia).  Third, this atlas was the first to contain a separate and specific map showing the Republic of Texas.  Fourth and finally, Bradford's atlas in some instances broke the Euro-centric mold regarding atlas production.  Among other things, Bradford focused his atlas on the Americas and abandoned the classical decoration common in European atlases in favor of a more informational and inherently American approach.