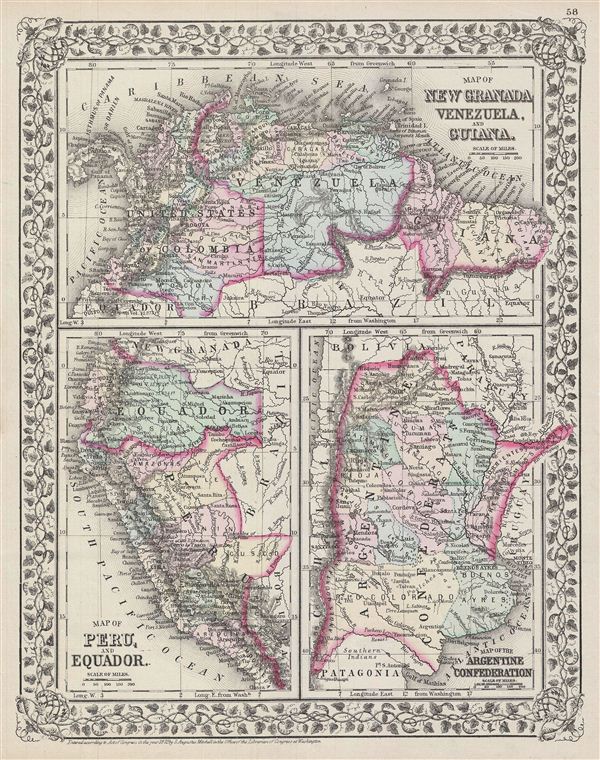 Simon Bolivar's vision of Gran Columbia was proven untenable and in 1829 and 1839, respectively, Venezuela and ecuador became independent nations leading to period of political upheaval and civil war throughout the region. Venezuela dissolved in the bloody Federal War (1859-1863) in which a significant percentage of the population perished. Colombia became the Confederación Granadina, a short lived federal republic that consisted of modern day Colombia and Panama. The Confederación, facing strong opposition from both liberal and conservative elements, dissolved in 1863 in the midst of the Colombian Civil War (1860 – 1862).

This map also identifies various cities, towns, rivers and an assortment of additional topographical details. Map is color coded according to political boundaries with elevation rendered by hachure. One of the most attractive American atlas maps of this region to appear in the mid-19th century. Features the vine motif border typical of Mitchell maps from the 1866 - 1882 period. Prepared by S.A. Mitchell for inclusion as plate nos. 58 in the 1872 issue of Mitchell's New General Atlas. Dated and copyrighted, 'entered according to Act of Congress in the Year 1872 by S. Augustus Mitchell in the Office of the Librarian of Congress at Washington.'