1831 Dower Map of Peru and Bolivia 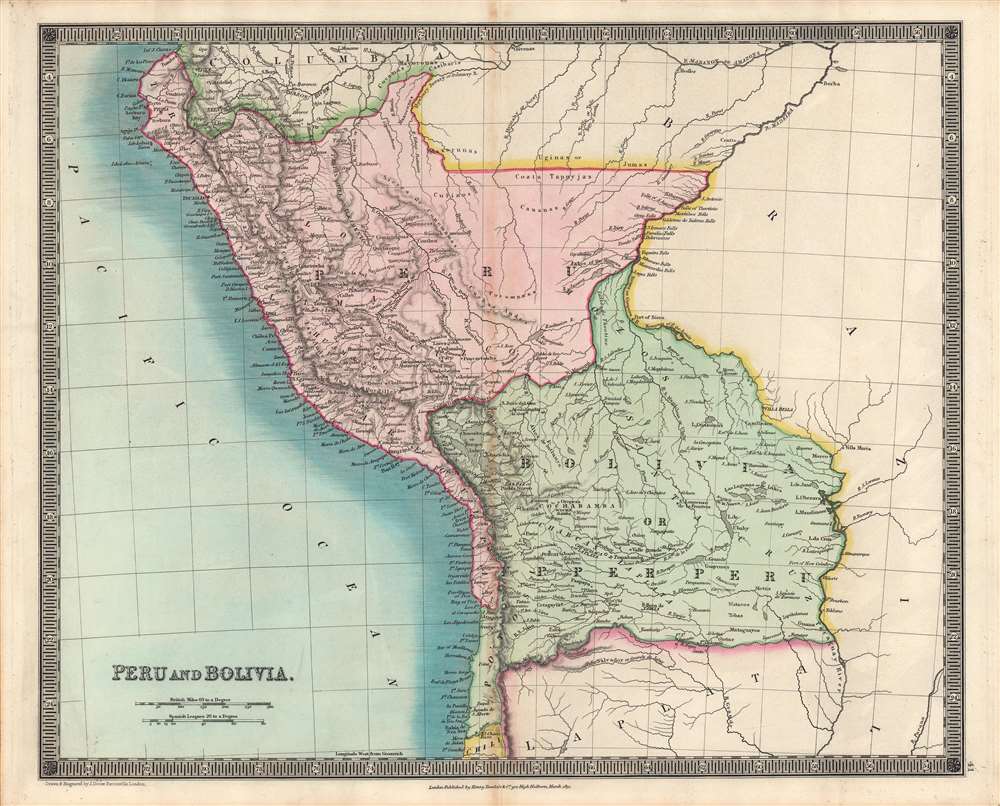 1831 Dower Map of Peru and Bolivia

Peru and Bolivia in the early years of independence.
$250.00

This is the Henry Teesdale / John Dower 1831 map of Peru and Bolivia published in A New General Atlas of the World. It depicts the titular countries and their neighbors as they emerged from Spanish rule and contended with internal and external conflicts over borders, social structures, and systems of government.

This map was published in the years after Peru, Bolivia, and other South American republics won their independence, following a long and difficult conflict with the Spanish crown. But the constitution of the new republics, their political representation, and their borders were far from fixed, leading to further conflict. Just three years before this map's publication, Peru fought a border war against Bolivia, a prelude to a larger war with Colombia (Gran Colombia), which resulted in the latter state's dissolution and the dramatic fall of Simón Bolívar. In the late 1830s, attempts were made to unite Peru and Bolivia through both peaceful and forceful means. In the late 1870s, the two former rivals teamed up in yet another border dispute against Chile.

The present-day borders differ somewhat from what is illustrated here. For instance, Bolivia's border with Peru now runs through and to either side of Lake Titicaca (Chucuito), while the border between Peru and Chile now sits between Tacna and Arica, both part of Peru here.

Domestic politics were just as contentious, with uncertainty over the system of government to be adopted, the relative strength of different branches of government, the role of the military, and the social groups whose interests the government would represent. Indigenous (Indian) communities, who composed most of the population in Bolivia and certain areas of Peru, were at best neglected and at worst oppressed by the new republics, despite the hopes of Bolívar to improve their lot. Neighboring countries went through similar transformations; 'La Plata' at bottom refers to the United Provinces of the Río de la Plata, the confederation that Bolivia had earlier belonged to, and whose remnant parts merged the same year as this map's publication to form Argentina.

This map was engraved by John Dower for the 1831 edition of A New General Atlas of the World, published by Henry Teesdale. This appears to be an especially rare presentation of Dower's Peru and Bolivia map, not matching any of the examples in the David Rumsey Historical Map Collection or other major digital repositories. Although undated, based on contextual evidence (such as the inclusion of La Plata), it almost certainly is an example from 1831. The map is only cataloged in the holdings of five institutions, though as stated above the present map is likely to be distinct from those examples in coloration and presentation.

Very good. Some discoloration along fold line and in margins.