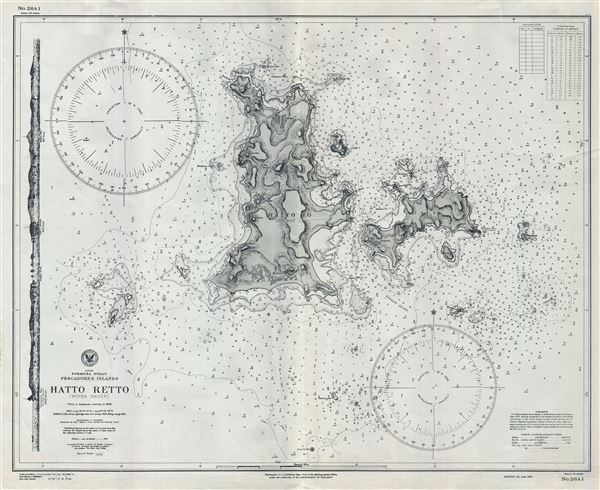 This is an uncommon 1941 World War II era map or nautical chart of Hatta-Retto or the Rover Group by the U.S. Navy Hydrographic Office. This chart covers the Islands of Pachau and Tsiang. Hatta-Retto or modern day Wang-an subdivision is part of the Pescadores or Penghu Islands located off the western coast of Taiwan or Formosa, in the Taiwan Strait. Based on Japanese surveys in 1896, with additions to 1941, this chart offers extraordinary detail throughout including topography. The map shows considerable inland detail for a nautical chart, noting buildings, towns, hills, etc. The chart includes countless depth soundings in fathoms as well as notes on currents and other practical information for the mariner. An elevation profile is included along the left margin. First issued in 1912, the map, in this state, has been updated to 1941. Issued as chart no. 2641 by the U.S. Navy at the Hydrographic Office under the authority of the Secretary of the Navy.

Very good. Minor wear along Original fold line.
Looking for a high-resolution scan of this?