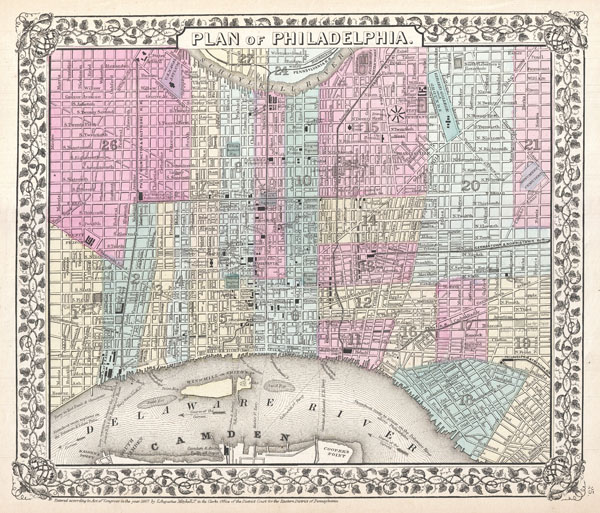 A beautiful example of S. A. Mitchell Jr.'s 1867 map of Philadelphia, Pennsylvania. Covers Philadelphia, focusing on the downtown area between the Schuylkill and Delaware Rivers. This is one of the last iterations of Mitchell's standard single page map of Philadelphia. Subsequent editions reimagined the Mitchell Philadelphia to account for urban expansion to the west of the Schuylkill. Names important buildings, parks, roads, railways, public work, and military installations. Color coded according to city wards. Surrounded by the attractive vine motif border common to Mitchell atlases between 1866 and 1880. One of the more attractive atlas maps of Philadelphia to appear in the latter half of the 19th century. Prepared by S. A. Mitchell Jr. for inclusion as plates 25 in the 1867 issue of Mitchell's New General Atlas. Dated and copyrighted, 'Entered according to Act of Congress in the Year 1867 by S. Augustus Mitchell Jr. in the Clerks Office of the District Court for the Eastern District of Pennsylvania.'