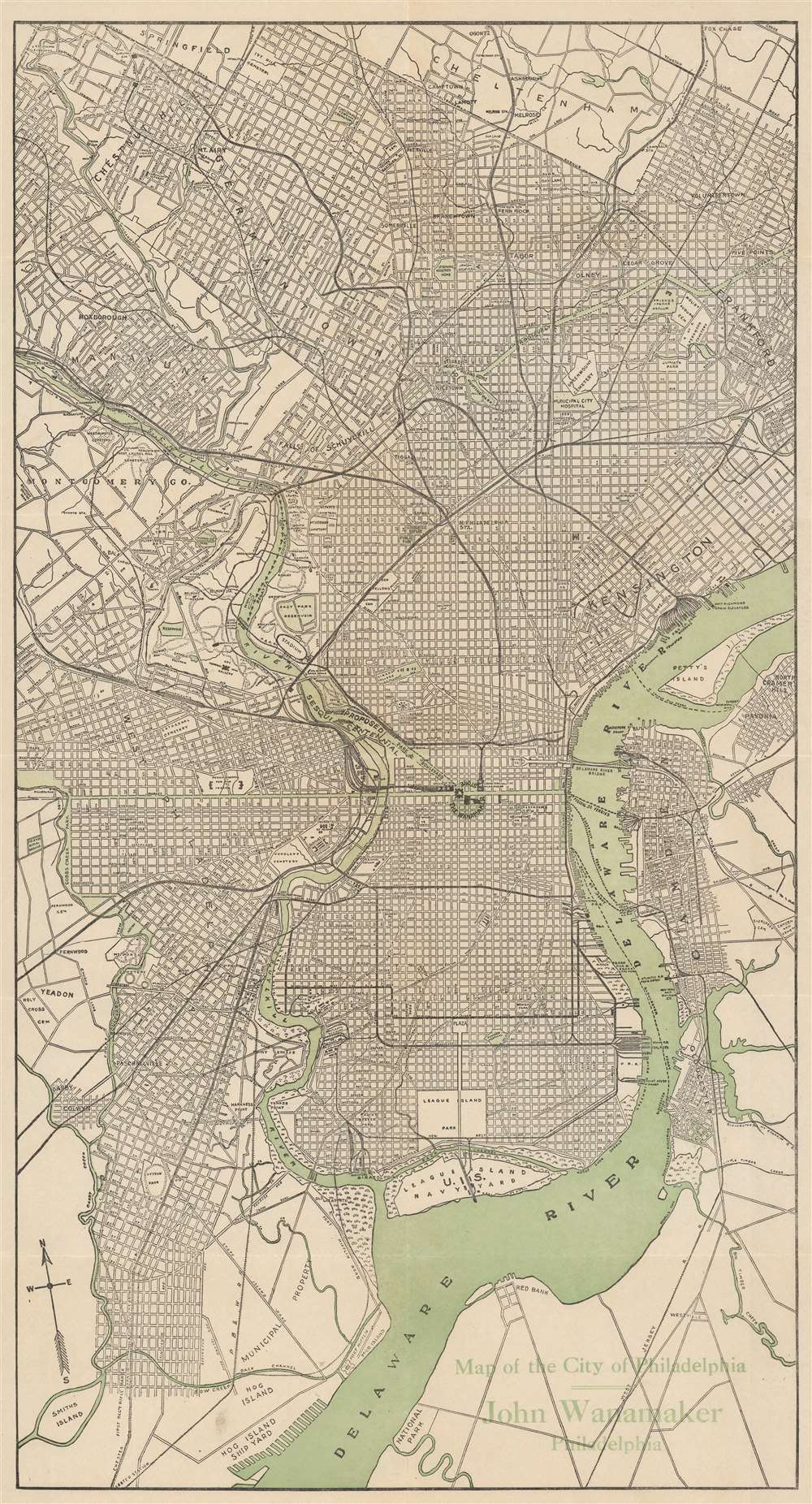 This is a detailed 1917 plan of the city of Philadelphia, published by the pioneer merchant and advertiser John Wanamaker. Not only a promoter of his stores, Wanamaker was a civic booster for Philadelphia and published several historical and laudatory works about the city. The 1917 Guide included the present map - both for the edification and use of visitors, but also to promote the Philadelphia Sesquicentennial Exposition, which Wanamaker proposed in 1916 to take place in 1926. The map illustrates the suggested site for the Exposition, along the Benjamin Franklin Parkway then under construction and named Park Boulevard on the plan.

The map was included in Wanamaker's Philadelphia: a Guide (also known as A Friendly Guide-Book to Philadelphia.) As no publisher is named, it was very likely entirely an in-house production by Wanamaker's, who appear to have had a printing operation as well as a full-time copywriter. It is entirely possible that credit for the writing belongs there. The guide book appears in eighteen institutional collections. The separate map is catalogued six times in OCLC.

John Wanamaker (July 11, 1838 - December 12, 1922) was an American merchant and public figure, and a pioneer in advertising and marketing. Born in Philadelphia, Pennsylvania, he would found the famous department stores that carried his name. Later in life he served as U.S. Postmaster General during the term of President Benjamin Harrison, (1889 - 1893.) He opened his first, Philadelphia store - Oak Hall - in 1861; his second store opened in 1869, and this one would be named John Wanamaker and Co.; in 1875, he moved the growing business into an abandoned railroad depot and converted it into what is considered the first department store in Philadelphia. The 12-story Grand Depot, with its Grand Court, pipe organ, iconic Eagle statue, and holiday light shows became an institution. In 1896 Wanamaker expanded into New York City, taking over space that had been established by A. T Stewart. He expanded again into an adjacent, newly-built 14-story edifice which Wanamaker cannily had built with its 32 acres of retail space directly accessible via the new Astor Place subway station. A proponent of the power of advertising, he was the first retailer to place half and later full-page newspaper advertisements, eventually hiring the world's first full-time copywriter to fuel his circulars. The arrival of Wanamaker's stores in New York was spearheaded with a vigorous newspaper campaign, including the clever innovation of producing the first subway map intended for use by its ridership. Learn More...