1702 Scherer Map of the Philippine Islands (Philippines) and Guam 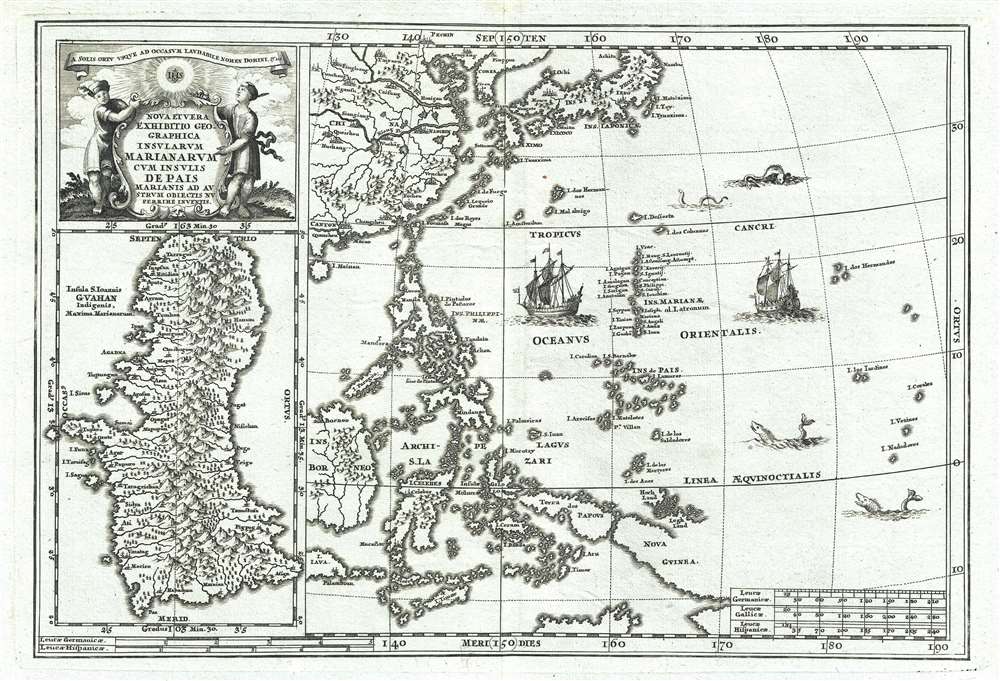 1702 Scherer Map of the Philippine Islands (Philippines) and Guam

A stunning 1703 map of the Philippines, South China Sea, western Pacific, and Guam by Heinrich Scherer. Essentially two maps on a single sheet, the primary map, appearing at right, covers from Korea to New Guinea and from Borneo to the Marinara Islands, including China, southern Japan, the Philippines, the Marinara Islands, and parts of Indonesia and New Guinea. The left had map is a detailed study of Guam - which has recently converted to Christianity. It bears a Jesuit themed title cartouche and exhibits several ships (Magellan?) and various sea creatures in the Pacific.

It may seem unusual for a German map of 1703 to contain such a large and detailed map of Guam, a tiny island in the Pacific. Guam's outsized presence on this map reflects Scherer's religiosity and fervor for conversation to the faith. Guam was first encountered by Ferdinand Magellan in 1521, but not settled until the 1565 arrival of Miguel Lopez de Legazpi. Despite Legaspi's claim, it was largely ignored by Europeans for the subsequent century. Nonetheless, on June 15, 1668, the galleon San Diego arrived bearing Jesuit missionaries led by Padre Diego Luis de San Vitores. San Vitores introduced Christianity to the island and began to develop trade with Spanish colonies in Mexico and the Philippines. The Spanish taught the indigenous Chamorros to cultivate maize (corn), raise cattle, and tan hides. The missionaries also introduced Spanish language, dress, culture, and most importantly, Catholicism, which quickly became the island's dominant religion. To a religious Jesuit like Scherer, the conversion Guam would have seemed a triumph of Catholic values with significance far greater than the actual size and population of the remote Pacific island might suggest.

This map was published to Scherer's important Atlas Novus.

Heinrich Scherer (1628 - 1704) was a Jesuit cartographer, geographer, and professor. Scherer served as a Professor of Hebrew, Ethics, and Mathematics at the University of Dillingen in Germany until around 1680 when he became the Official Tutor to the Royal Princes of Mantua and Bavaria in Munich. During his time in Munich, Scherer's work as a cartographer gained recognition and acclaim. His atlas, the Atlas Novus was first published between 1702 and 1710 and subsequently reissued between 1730 and 1737. The Atlas Novus is recognized as a revolutionary work that highlighted the highly sophisticated cartographical work accomplished by Jesuits during the early 18th century. The atlas featured maps from all over the known world and included the religious tendencies of the given region, along with the desire to promulgate the Catholic faith. Learn More...

Scherer, H., Atlas Novus (Munich) 1703.     Scherer's Atlas Novus was published in Munich between 1702 and 1710. The atlas included 180s spread over seven separately titled volumes: Geographia Naturalis, Geographia Hierarchica, Geographia Politica, Tabellae Geographicae, Atlas Marianus, Critica Quadrapartita, and Geographia Artificialis. Each volume featured a fine allegorical title page. The maps combine Scherer's Jesuit Catholic religiosity with serious geographical innovation. In Geographia Politica and Geographia Naturalis he introduced revolutionary thematic maps illustrating mountains, forests, and waterways in physical relief. Most of the maps were engraved between 1699 and 1700 by Leonard Hecknaeur, Joseph Montelegre or Matthus Wolfgang. In general, his work is considered a milestone in scientific and thematic mapping. The atlas was reissued in a second edition between 1730 and 1737.