1911 Bach Map of the Philippines 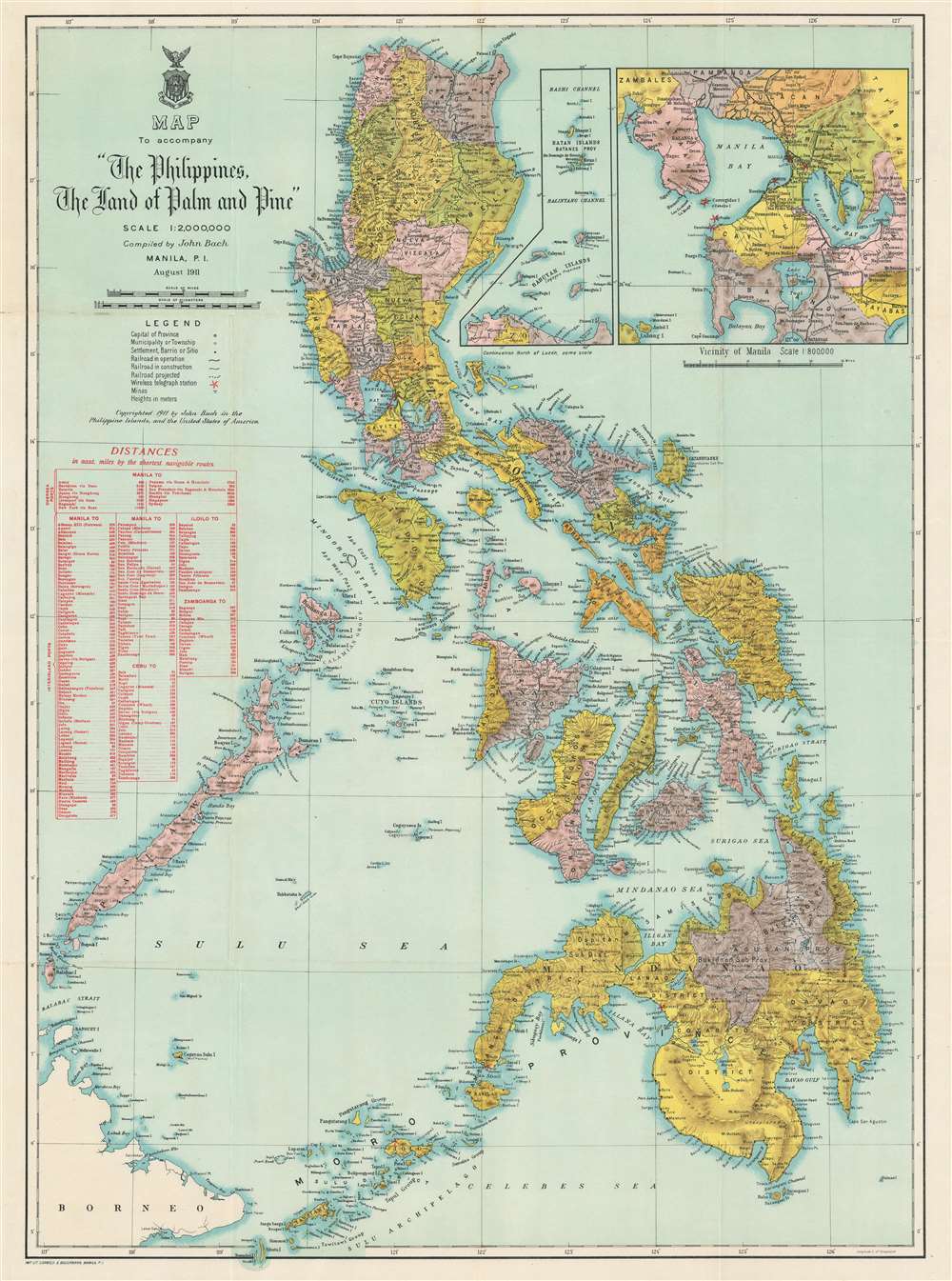 1911 Bach Map of the Philippines

Scarce map of the Philippines published in Manila.
$750.00

This is a 1911 John Bach map of the Philippines published in Manila. Provinces are illustrated, labeled, and shaded. Operating railroads on Luzon, Cebu, and Panay appear as thick black with stops noted. Red 'stars' made of bolts of electricity mark wireless telegraph stations: six appear on Luzon and another three operate on Mindanao. Two insets are situated in the upper right. One details the vicinity of Manila and the other the Babuyan Islands, Balintang Channel, and Batan Islands north of Luzon. A table in red along the left border provides overseas port connections with Manila and the shortest distance in nautical miles along with interisland connections between Manila, Cebu, Iloilo, and Zamboanga.

John Bach (1872 - 19xx) was a Norwegian-American cartographer. Born in Norway, Bach arrived in New York in March 1893 and became a citizen on January 10, 1902. On April 20, 1902, he was appointed to the civil service of the Philippine Islands as a member of the Bureau of Coast and Geodetic Survey. Throughout his many years working for the Coast and Geodetic Survey, Bach produced numerous maps of the Philippines for the Survey. By 1917, Bach was the chief of the drafting division in Manila. It is unclear exactly how long Bach stayed in the Philippines, but he was there until at least 1927, because of a record of him and his family traveling from Manila to New York City in July 1927. He appears in the 1930 U.S. Census as an employee of the U.S. Coast and Geodetic Survey. Bach married an American, with whom he had two daughters. Learn More...


Carmelo and Bauermann (1887 - 1938) was a publishing house established in Manila by Don Eulalio Carmel y Lakandula, an artist-engraver, and William Bauermann, a German lithographer and cartographer, who was working for the Bureau of Forestry at the time. The firm operated out of 2057 Azcarraga. The press soon became one of the leaders in modern printing in the Philippines. Carmelo's son, Alfredo Carmelo (the famous Filipino pilot) operated the firm until 1938. Learn More...

Arnold, J.R., The Philippines The Land of Palm and Pine. An Official Guide and Hand Book.(Bureau of Printing: Manila) 1912.