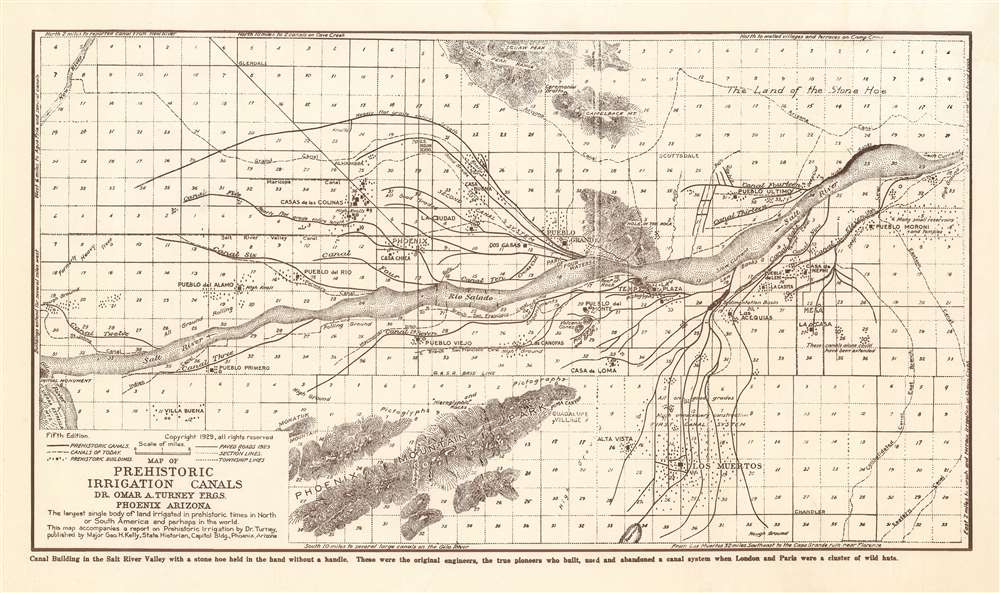 This 1929 Omar Turney map of regional Phoenix, Arizona shows the results of exhaustive surveys cataloguing Hohokam canal systems in the Salt River Valley. Constructed with hand tools over the span of several hundred years as far back as 600 C.E., this canal system is the largest pre-industrial irrigation system in the Western Hemisphere. Major canals in the system extended as far as twelve miles in length. They were remarkably sophisticated, tapered to maintain a constant velocity of water along their length, and varied in construction to suit changes in terrain. They remained useful for a millennium: Spanish explorers found modern Pima using some of these canals as recently as the 18th century. Turney’s astonishment and respect for the accomplishments of these ancients is evident in the text of the map:

These were the original engineers, the true pioneers who built, used and abandoned a canal system when London and Paris were a cluster of wild huts.

Turney’s survey appears to be the most definitive of the Salt River canal system available today. It was the product of observations made over the course of more than forty years of study, and shows dozens of pre-historic canals on both sides of the Salt River in the vicinity of Phoenix, Tempe and Scottsdale. The map accompanied Turney’s multi-installment Prehistoric Irrigation in the 1929 Arizona Historical Review, which proved to be the surveyor’s swan song. The map provides a record of the Hohokam canal system which would be unmatched until extensive aerial surveys became available, and goes beyond this to supply irreplaceable archaeological evidence for the ruins of abandoned pre-historic temples and settlements in the area, subject to sharp attrition at the hands of European settlers. Turney laments:

… Forty years ago few had been destroyed. One by one we have seen them torn down, but so many remained that it seemed the whole story of the early race could be told many times over from those that remained. With keen resentment we heard an outsider come here and declare that all were gone. When this report was begun, it still seemed that plenty remained. We drove about to measure them up and with astonishment found that thirty-one edifices of the past are now of the past themselves: only two remain. As a report, this preliminary has become an obituary!

Thus, a great many of the Hohokam ruins to be found in this area in the 1880s are recorded with precision only on this map. In addition to specific temples and pueblos, the map notes the location of pictographs, pictoglyphs and hieroglyphs throughout the region. A ceremonial grotto is marked on the sacred Camelback Mountain, as does Phoenix’s famous ‘Hole in the Rock’ landmark.

Confusingly, several of the names of ruins found on the map are drawn from Mormon scripture. Turney noted in his third installment of ‘Prehistoric Irrigation’ that

Casa de Nephi was so named in thanks to the leaders in the Mormon Church for their long and untiring efforts to check and verify every detail of the Turney map in their part of the valley. Names in this locality are taken from the Book of Mormon.

Other such place names include Pueblo Moroni, and Pueblo Lehi.

The map is skillfully executed. Mountains are shown with hachures, and include the foot of the Sierra Estrellas, the Phoenix Mountains, the Squaw Peak mountain range and Camelback Mountain. The Salt River and part of the Gila River are shown with stippling. Interestingly, within the hachures of the Phoenix Mountain Park can be seen the letters ‘O. A. TURNEY,’ suggesting that the lithography of the map was the surveyor’s own work. Another personalizing feature appearing on the north bank of the Salt River is the Park of Four Waters. Turney chose this location - now part of the Pueblo Grande Museum - to be the final resting place of his ashes after his death.

Although the text of the map identifies it as 'Fifth Edition' we see no evidence that any earlier edition of this map was ever committed to print. OCLC shows six copies of the separate map in institutional collections. We have not found any record of this map appearing on the market.

Dr. Omar A. Turney (November 1, 1866 - December 21, 1929) was an American archaeologist and engineer. He had been employed beginning 1888 as assistant engineer on the rebuilding of the Arizona canal dam, and was later employed as a surveyor for the Santa Fe, Prescott and Phoenix Railway. He also served successively in the United States geological survey and in the United States reclamation service. He was one of the principal sponsors of the Roosevelt Dam, and is largely responsible for the name given the dam. For twelve years after leaving the government service Dr. Turney served the cities of Phoenix, Mesa, Tempe and Glendale as city engineer. For many years he was secretary and managing trustee of the Phoenix Public Library. In his last year of life he published a series of articles in The Arizona Historical Review entitled 'Prehistoric Irrigation,' the result of the collection of data over period of more than forty years. He is known to have produced a map of ancient canals in the area of Phoenix, AZ, which attended the series. His findings were presented to the Royal Geographic Society of London, resulting in his being made a Fellow of the society. Learn More...