1950 Pictorial Map of all Five Great Lakes and Ontario, Canada 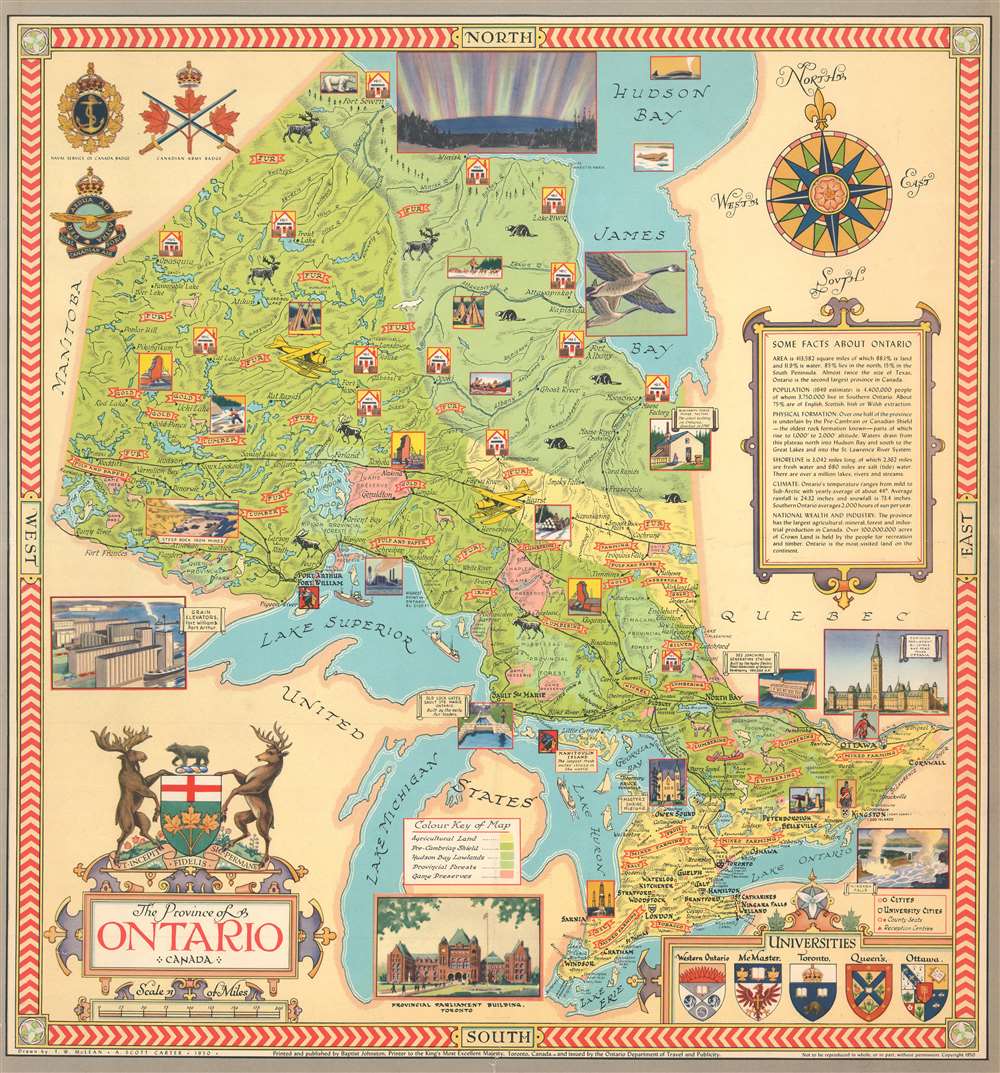 1950 Pictorial Map of all Five Great Lakes and Ontario, Canada

This is a 1950 Thomas Wesley McLean and Alexander Scott Carter pictorial map of the five Great Lakes and the province of Ontario, Canada. The map depicts the region from Manitoba to Quebec and from the Hudson Bay to Lake Erie. Each of the five Great Lakes, situated in the bottom half of the map, are labeled. Ships are illustrated plying their waters and fish hint at the natural bounty provided by the lakes themselves. Manitoulin Island, the largest freshwater island in the world, is illustrated and labeled. Vignettes present charming scenes of life in Ontario, such as a musher with a team of sled dogs, a woodsman transporting logs via horse-drawn sledge, and people in a canoe on one of the province's many rivers and lakes. Other vignettes highlight Ontario's industry, such as power stations, grain elevators, iron mines, and individual industries, including lumbering, fur, pulp and paper, farming, and the mining of iron and gold are referenced by colorful banners. Illustrations of animals native to Ontario, including polar bears, caribou, moose, and beaver, dot the landscape.

Toronto, Sault St. Marie, Kingston, and Ottawa are among the numerous cities, towns, and villages labeled throughout the province. Railroads connect many of these cities, although no roads are shown. A key situated in the bottom third of the map explains the different colors used and how they provide information concerning land use. A decorative title cartouche is situated in the lower left corner, with a view of the Provincial Parliament Building in Toronto to its right. In the lower right corner sits an inset that displays the coats of arms of five universities based in Ontario, including Ottawa, Toronto, and Queen's. An illustration of the Dominion Parliament Building in Ottawa, placed along the right border, appears below a cartouche bearing facts about the province of Ontario. Badges of the Canadian Army, Navy and Air Force are included in the upper right corner.

This map was drawn by Thomas Wesley McLean and Alexander Scott Carter and published by Baptist Johnston in 1950. The OCLC records examples in institutional collections of the University of Connecticut, the Buffalo and Erie County Public Library, the University of Michigan, the University of Illinois Urbana-Champaign, the Wisconsin Historical Society, and Queen's University in Kingston, Ontario.

Thomas Wesley McLean (1881 - 1951) was a Canadian artist and graphic designer active during the early- to mid-twentieth century.


Alexander Scott Carter (April 7, 1881 - December 30, 1968) was an English draftsman, architect, delineator, and artist active in Toronto. Carter attended the Bournemouth School of Art from 1899 to 1902 while he worked in the office of a local architect, J.S.C. McEwan-Brown. He moved to London after graduating, where he worked in the office of William Hunt as an assistant from 1902 - 1909 and then from 1909 - 1912 for London architect Alan G. James. While in London he took classes in architecture and art at the Royal Academy Schools from 1905 - 1908. In March 1911 Carter joined the Royal Institute of British Architects, but emigrated to Canada late the following year. He settled in Toronto, where he soon gained a reputation for his skill and achievement and completed projects for many of Canada's elite over the course of the ensuing two decades.