1680 De Wit Map of the Celestial Hemispheres (Stars and Constellations) 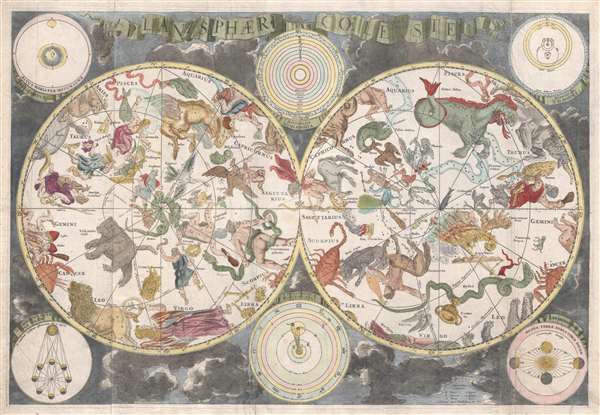 1680 De Wit Map of the Celestial Hemispheres (Stars and Constellations)

A remarkable and very rare example of Frederic de Wit's c. 1680 oversized and beautifully engraved double hemisphere celestial map. The map consists of two hemispheres surrounded by six supplementary diagrams. These illustrated the Copernican hypothesis, the Ptolemaic hypothesis, the Tycho Brahe hypothesis, an illustration of the phases of the moon relative to the Sun, the rotational pattern of the day, and the rotation of the Moon around the Earth. The map is further embellished by dark storm clouds and an elaborate title banner.

Each major hemisphere is centered on the elliptic pole and rendered on a polar stereographic projection with an external orientation. The constellations are shows in pictorial form with emphasis given to the constellations associated with the Zodiac. Important stars and other astronomical and astrological features are noted. The content and deportment of the constellations is clearly derived from the celestial hemispheres appearing as supplementary material on Joan Blaeu's remarkable 1658 wall map of the world (Shirley 371).

De Wit published this as a separate issue and as such it was not officially part of any atlas - although it did occasionally appear bound into Allard's 1705 Atlas Major and Sanson's Atlas Nouveau. This map may have been issued in conjunction with Pierre Mortier. Extremely rare. The OCLC identifies only 3 institutional examples and there appears to be no identifiable sales record on the private market.

Good. Printed on two sheets and joined by publisher. A few minor verso repairs and reinforcemnts. Minor fold wear. Else a beautiful example.