1780 Raynal and Bonne Map of the World 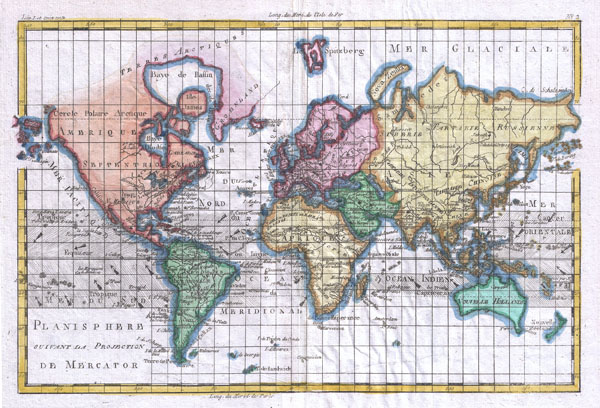 1780 Raynal and Bonne Map of the World

A fine example of Rigobert Bonne and G. Raynal's 1780 map of the world on a Mercator Projection. Offers a fairly advanced perspective of the world showing the most recent discoveries and explorations. Nonetheless, there are a few interesting errors. In the northwestern part of America a pre-Cook geography includes an archipelago roughly where Alaska stands today - no doubt a primitive attempt at rendering the Aleutians. Australia, labeled Nouvelle Holland is linked to Tasmania - a misunderstanding that would be correctly shortly after the publication of this map. Bonne additionally notes ocean currents in the Tropics. Drawn by R. Bonne for G. Raynal's Atlas de Toutes les Parties Connues du Globe Terrestre, Dressé pour l'Histoire Philosophique et Politique des Établissemens et du Commerce des Européens dans les Deux Indes.