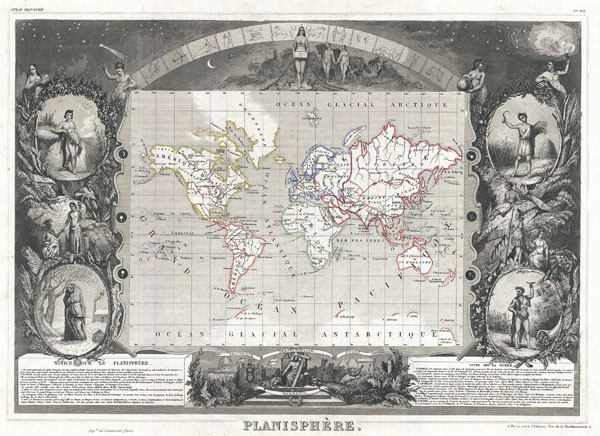 A visually stunning decorative map of the world dating to 1852, by French map publisher Victor Levasseur. Levasseur depicts the world on a Mercator Projection, showing the six known continents as well as traces of Antarctica. The cartographic style of this piece is minimalist, but a few elements do bear special note. These include the extension of Oregon territory well into British Columbia, reflecting the American claims that later led to the 54 40' dispute. Also in North America, Texas is identified as an independent nation. Far to the north both the Northwest Passage over America and the Northeast Passage over Europe and Asia, are drawn as open and practically navigable waterways.

This particular map is surrounded by four medallions bearing allegorical representation of each season. Spring, in the upper left, is represented by a young unclothed woman modestly covering herself with garlands. Summer, in the lower right, is a powerful bearded man wearing an animal skin and surrounded by the bounty of life. Fall, upper right, is a young man reaping the harvest. And winter, lower left, is a huddled old woman in a barren snow covered setting.

At the base of the map an even more interesting scene unfolds in the form of a curious panorama. Here Jesus sits enthroned, bearing a cross in his left hand and pointing with his right, his head surrounded by a pyramid (a Masonic reference?). To his left are a stoic crowd including Napoleon, Socrates, and other unidentifiable great men bearing signs reading 'Paix' (peace), 'Liber' (freedom), and 'Egalite' (equality). Behind them is a domed building that appears to be a Greek or Roman temple. Opposite this scene, on Jesus' right is a very different scene showing a crowd fleeing in terror - these include a Pharisee holding the Torah and a turbaned Saracen. Behind them are the pyramids of Egypt. They are running towards what appears to be the jungle in the midst of which is a plinth upon which sets a bust of Satan. In this we can only assume that Levasseur is attempting to convey the righteousness of reason and logic over emotion and old world superstition.
Publised by V. Levasseur as page no. 95 in the 1852 edition of his Atlas National de la France Illustree.